The Turkish Prime Minister has called for urgent action to help Somalia alleviate its humanitarian crisis and to build peace and stability, stressing that the world cannot let the cry of the Horn of Africa nation go unheard.

“Today the international community is watching the suffering in Somalia like a movie,” Recep Tayyip Erdogan told the high-level debate of the General Assembly yesterday. “However, we should urgently face this situation which is a test to our humanity.”

Mr. Erdogan said he witnessed the poverty and suffering of the Somali people during a visit to the country last month.

“The tragedy of Somalia, where tens of thousands of children died due to the lack of even a piece of bread and a drop of water, is a shame for the international community…

“No one can speak of peace, justice and civilization in the world if the outcry rising from Somalia is left unheard.”

Turkey has launched an aid campaign for Somalia, collecting $300 million within the last two months. It also organized an emergency meeting of the Organization of Islamic Cooperation (OIC) that resulted in more than $350 million in pledges, and has undertaken various projects, ranging from transport and agriculture to education and construction of roads, hospitals and schools.

And by re-opening its embassy in the Somali capital, Mogadishu, Turkey has shown the world that claims of security challenges cannot be an excuse for delaying assistance, said Mr. Erdogan.

In addition to alleviating the humanitarian situation, it is also necessary to act urgently to support efforts to build peace and stability in Somalia, he added.

“As Somalia takes its well deserved place within the international community, the world will become a safer and more stable place,” Mr. Erdogan said.

The Prime Minister also voiced Turkey’s “unconditional” support to the recognition of the State of Palestine, and called on Israel to take the necessary steps towards peace rather than building new barriers.

Turkey, he noted, has never pursued hostile and confrontation policies against any other country, but has always acted on the basis of cooperation and friendship.

“However, Israel has made a grave mistake against a country and its people,” he said, referring to the May 2010 incident in which nine people were killed during Israel’s interception of an aid flotilla headed for Gaza that originated in Turkey.

An independent panel of inquiry examining the flotilla incident released a report earlier this month in which it found that Israel’s interception of the vessels was “excessive and unreasonable,” while the flotilla acted “recklessly” in attempting to breach the naval blockade.

“Our demands from Israel are known,” said the Prime Minister. “Our position will not change unless Israel takes the necessary steps to redress its mistake and meet our demands.”

Turning to Cyprus, he said that Turkey will continue to support a comprehensive and lasting solution to produce a united country, in line with the UN-backed negotiations, but will not let the future of the Turkish Cypriots remain uncertain forever.

“At this critical juncture, we can also not accept any attempt by the Greek Cypriot side to act as if they are the sole representative of the island or have the authority to make decisions on behalf of the Turkish Cypriots,” he stated.

The attempts by the Greek Cypriot side to unilaterally determine maritime jurisdiction areas and to engage in oil and natural gas exploration activities in these fields are “extremely irresponsible” both in terms of timing and possible outcomes, the President added.

Mr. Erdogan also discussed the Cyprus talks and the flotilla report, among various other issues, in a meeting with Secretary-General Ban Ki-moon yesterday. 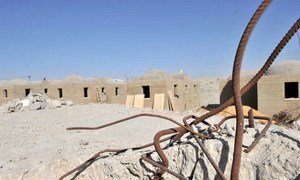 Secretary-General Ban Ki-moon today received the report of the independent panel of inquiry examining the May 2010 incident involving a flotilla headed for Gaza which found that Israel’s interception of the vessels was “excessive and unreasonable,” while the flotilla acted “recklessly” in attempting to breach the naval blockade.