Kevin Rudd told the Assembly’s annual general debate, held at United Nations Headquarters in New York, that is what needed now is “global and national political leadership capable of looking beyond the next electoral cycle.”

Mr. Rudd noted that the International Monetary Fund (IMF) said earlier this week that the global economy has “entered a new and dangerous phase,” with the recovery stalling, unemployment rising and confidence waning.

Economic growth forecasts for the rest of this year and for 2012 have been scaled back, he added.

Mr. Rudd called for the implementation of recommended reforms to the global financial sector so that taxpayers “are no longer asked to bail out the irresponsible behaviour of major financial institutions. Some of these institutions have become far too comfortable with the practice of privatizing their profits and socializing their losses.”

He said the world’s major economies must “find a credible path back to surplus over time,” while care must also be taken to avoid a repeat of the protectionist policies of the 1930s.

Citing a recent estimate that a successful conclusion to the long-running Doha Round of international trade talks could boost global trade by $794 billion a year, he said “we must all harvest the political will of the global community to act.”

And he added that for China’s surging domestic demand to make a greater contribution to international economic growth, “we must also see currency reform, particularly with the appreciation of the Chinese yuan.”

Other important measures, he said, included developing innovative forms of public-private financing to pay for new infrastructure, improving the participation of women and young people in the economy, and boosting education and skills training so that more people worldwide can take advantage of economic opportunities. 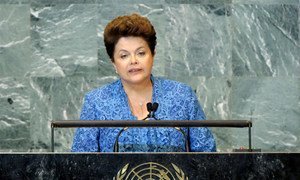 Unless governments take urgent steps to deal with the ongoing global economic crisis, “a grave political and social rift” could open up between countries and peoples, Brazilian President Dilma Rousseff warned world leaders gathered today at the General Assembly.