The Security Council today voiced its determination to enhance the effectiveness of the United Nations in defusing potential and ongoing conflicts, and encouraged the world body to use all the preventive diplomacy tools at its disposal.

The Security Council today voiced its determination to enhance the effectiveness of the United Nations in defusing potential and ongoing conflicts, and encouraged the world body to use all the preventive diplomacy tools at its disposal.

During a high-level meeting chaired by President Michel Sleiman of Lebanon, which holds the Council’s presidency for September, the 15-member body also underlined the “overriding political, humanitarian and moral imperatives as well as economic advantages” of preventing the outbreak, escalation or relapse into conflicts.

The UN currently has an array of assets available to it in the area of preventive diplomacy, including the Secretary-General’s good offices, envoys, early warning systems, the Mediation Support Unit of the Department of Political Affairs (DPA), and fact-finding missions.

“The Council encourages the Secretary-General to increasingly and effectively use all the modalities and diplomatic tools at his disposal under the Charter for the purpose of enhancing mediation and its support activities,” it added in a presidential statement.

In his address yesterday to world leaders gathered in New York for the General Assembly’s general debate, Secretary-General Ban Ki-moon said preventing and mitigating conflicts was one of the five “generational opportunities to shape the world of tomorrow by the decisions we make today.”

In a report on the issue released earlier this month, he cited recent successes in easing mounting tension between Rwanda and the Democratic Republic of the Congo (DRC), post-election violence in Kenya, and the transition from military to civilian rule in Guinea.

“The pace, intensity and increasing professionalism of our preventive efforts are beginning to pay off,” he told today’s meeting.

“However, we still have a long way to go. Violent conflict continues to wreak a shocking toll on individuals, societies and economies. Every day, we can see the costs of the failure to prevent. Despite recent advances, preventive diplomacy continues to face long odds and numerous challenges,” he noted.

“Yet, I firmly believe that better preventive diplomacy is not an option; it is a necessity.”

The Secretary-General stressed that a critical factor is political will. “If the parties do not want peace, or are unwilling to compromise, it is extraordinarily difficult to persuade or impose it from the outside.”

Mr. Ban’s report was dedicated to the memory of former Secretary-General Dag Hammarskjöld, who died in a plane crash 50 years ago while trying to bring peace to the nascent but conflict-torn DRC.

It outlines several areas of focus, beginning with the need to prioritize early action, as well as continuing to invest in and better equip the women and men who lead UN preventive diplomacy efforts on the ground.

He also cites the need for adequate investment to deliver results, noting that prevention is “infinitely cheaper than cure – and is one of the smartest, most cost-effective investments we can make.”

It is also necessary to further strengthen the world body’s strategic partnerships with regional and sub-regional organizations, and to continue to support national institutions and mechanisms for mediation and dialogue, he added. Including civil society organizations in preventive efforts is critical, especially women and youth who can lead the charge for peaceful change.

♦ Receive daily updates directly in your inbox - Subscribe here to a topic.
♦ Download the UN News app for your iOS or Android devices.
preventive diplomacy 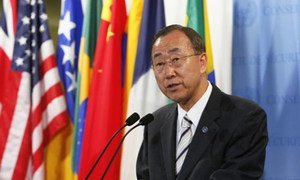 Secretary-General Ban Ki-moon is calling on the world community to reinforce preventive diplomacy which, through a system of early warnings and skilled interventions, can pre-empt conflicts before they erupt, saving both lives and national resources.