Thanking the United Nations for its role in resolving the electoral crisis after Côte d’Ivoire’s former leader refused to step down, President Alassane Ouattara today highlighted legislative elections later this year as a critical step towards cementing democracy.

In an address to the General Assembly on the second day of its annual general debate and in a separate meeting with Secretary-General Ban Ki-moon, he underscored the major role the UN has played and still has to play in a country that was split into a Government-run south and a rebel-held north by civil war in 2002.

Mr. Ouattara’s election last November was a key step in the reunification process, but defeated president Laurent Gbagbo refused for months to recognize the UN-certified results and unleashed a series of attacks, principally in Abidjan, the main city, where the UN peacekeeping operation in Côte d’Ivoire (UNOCI) worked to protect civilians.

Mr. Gbagbo finally surrendered to Mr. Ouattara’s forces in April and Mr. Ban pledged then that the UN would help the country restore the rule of law after the months of fighting and grave human rights abuses. UNOCI, with some 10,500 uniformed personnel on the ground, has been supporting stabilization and reunification efforts since 2004.

“Mr. Secretary-General… I want to reiterate in the name of the Ivorian people and Government as well as on my own behalf our profound gratitude and recognition for the decisive contribution of the United Nations and your own personal involvement in resolving the Ivorian crisis,” Mr. Ouattara told the Assembly.

“The organization of legislative elections before the end of this year will enable the reinforcing of democracy and social justice in Côte d’Ivoire, with the aid and support of the UN,” he said, citing his own efforts at national reconciliation since taking office and the need to re-launch the economic and social development of the country after so many years of conflict.

More widely he stressed the major role the UN has to play generally in reinforcing the international solidarity that is crucial in the search for efficient and appropriate solutions to a wide range of crises, from armed conflicts and terrorist activities to trans-national crime and pandemics.

In his meeting with Mr. Ban Mr. Ouattara discussed UN support to address the fragile security situation and cross-border threats. UNOCI has already sent two units to the country’s border with Liberia to assess the situation after a group of heavily armed militiamen crossed over and attacked two Ivorian villages last week, killing at least 18 people.

Mr. Ban welcomed Government progress towards national reconciliation and the preparations for the legislative elections, and voiced confidence in Côte d’Ivoire’s ability to recover and rapidly return to peace and prosperity. 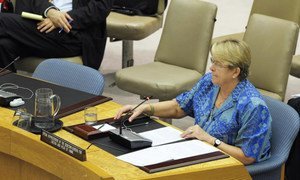 While the upcoming elections provide an opportunity to consolidate Liberia’s hard-won peace, the country will continue to need international support, particularly in strengthening its security institutions, the United Nations envoy to the West African nation said today.