Maldives today became the latest country to agree to be bound by the International Criminal Court (ICC), the independent, permanent tribunal set up to prosecute individuals accused of genocide, war crimes and crimes against humanity.

The Indian Ocean archipelago acceded to the 1998 Rome Statute, the legal document establishing the basis for the ICC, in New York today as part of the annual United Nations treaty event aimed at boosting countries’ engagement in the international treaty framework.

Maldives becomes the 118th State Party to the ICC, which is based in The Hague in the Netherlands and can try cases relating to war crimes committed since July 2002.

Malta, which is already a State Party, today acceded to an agreement on the ICC’s privileges and immunities.

Meanwhile, nine other treaty actions took place today at UN Headquarters in New York on the second day of the treaty event, with countries signing up to protocols on conventions on a range of subjects, from human rights to the environment to disarmament.

Maldives signed the Optional Protocol to the International Covenant on Economic, Social and Cultural Rights (ICESCR), Kyrgyzstan signed the Convention on the Rights of Persons with Disabilities and the Democratic Republic of the Congo (DRC) signed the Nagoya Protocol, which deals with the equitable sharing of genetic resources and their benefits.

Trinidad and Tobago acceded to the Convention on Cluster Munitions, while Italy ratified the pact.

Spain ratified the protocol to a 1979 convention on heavy metals and air pollution, and acceded to three separate optional protocols or convention related to privileges and immunities or diplomatic and consular relations.

♦ Receive daily updates directly in your inbox - Subscribe here to a topic.
♦ Download the UN News app for your iOS or Android devices.
international criminal 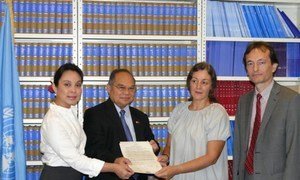 Philippines ratifies the Rome Statute of the International Criminal Court

Philippines today acceded to the Rome Statute, the treaty that established the International Criminal Court (ICC), when it deposed its instrument of ratification at the United Nations in New York.