The United Nations Children’s Fund (UNICEF) announced today that one of the all-time greats of women’s tennis, Serena Williams, will become the agency’s next international Goodwill Ambassador.

The United Nations Children’s Fund (UNICEF) announced today that one of the all-time greats of women’s tennis, Serena Williams, will become the agency’s next international Goodwill Ambassador.

Ms. Williams will focus in particular on the current Schools for Africa initiative and on the upcoming Schools for Asia programme, UNICEF said as it named the 29-year-old United States player to the post at a ceremony during the Social Good Summit in New York this afternoon.

“I believe all children deserve the chance to make something of their lives,” said Ms. Williams, who has won 27 Grand Slam titles – 13 in singles, 12 in women’s doubles and two in mixed doubles – and two Olympic gold medals so far during her career.

UNICEF Executive Director Anthony Lake described Ms. Williams as “a champion for children – and a passionate advocate for providing every child with a quality education.”

In 2006 Ms. Williams visited Ghana with UNICEF to see first-hand the West African country’s biggest health campaign. She distributed anti-malaria bed nets, helped demonstrate their use to local communities and joined a team of volunteer health workers as they immunized children against diseases.

The tennis ace joins a famous roster of UNICEF Goodwill Ambassador, including the soccer star David Beckham, the singer Shakira, the actor Orlando Bloom and the figure skater Yuna Kim. 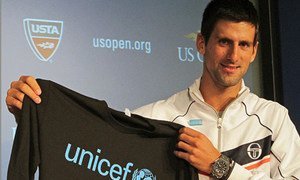 Tennis ace Novak Djokovic, currently ranked number one in the world, will serve as a National Ambassador for the United Nations Children’s Fund (UNICEF) in his native Serbia, where he will promote children’s rights and access to early childhood education.