19 September 2011
Secretary-General Ban Ki-moon announced today that Ian Martin, who has served as his key adviser on post-conflict planning for Libya, will become the head of the new United Nations support mission (UNSMIL) to the North African country.

Mr. Martin, a national of the United Kingdom who has served in a series of senior roles for the UN for most of the past two decades, will also be Mr. Ban’s Special Representative for Libya, according to a statement issued by the Secretary-General’s spokesperson.

The unveiling of the top posts comes just days after the Security Council authorized the formation of UNSMIL for an initial three months to help the new Libyan authorities in their reconstruction efforts as the conflict winds down after months of deadly fighting between Government forces and rebels.

Mr. Martin is en route to UN Headquarters in New York for tomorrow’s high-level meeting on Libya – which will be addressed by Mr. Ban – after three days of discussions in the capital, Tripoli.

The new Special Representative focused his talks on the UN’s role in supporting a transition to democracy in the wake of the downfall of Colonel Muammar al-Qadhafi, particularly regarding the electoral process, boosting public security and the rule of law, and upholding transitional justice and the rule of law.

Police training and reform is one of the main priority areas in which Libya’s new authorities, the National Transitional Council (NTC), have requested UN support. Mr. Martin introduced the new UN police adviser for Libya, Walter Wolf, to officials in Tripoli.

Ali Tarhuni, a senior minister in the NTC, stressed to Mr. Martin that Libyans were keen to start preparing to hold free and fair elections as soon as possible.

On Friday, the General Assembly voted to seat the NTC as Libya’s representative at the Assembly during its current 66th session, including the high-level segment that begins on Wednesday. The decision follows a report by the Assembly’s credentials committee. 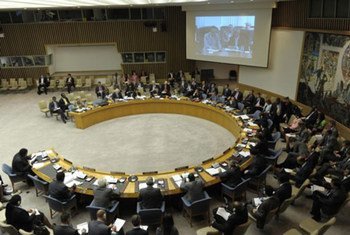 16 September 2011
The Security Council today agreed to deploy a mission to Libya to support the North African country’s transitional authorities in their reconstruction efforts after the end of the conflict, including restoring the rule of law, drafting a new constitution, promoting reconciliation and preparing for elections.