Member States were today invited to sign, ratify or accede to various international treaties during this year’s high-level General Assembly session next week, with a special focus on multilateral accords that deal with United Nations priorities, including human rights, disarmament, the prevention of terrorism and the protection of the environment.

The annual treaty event, which was initiated in 2000, is an awareness-raising occasion by the UN Secretary-General, who is the depository of the 550 multilateral treaties that establish the rules of conduct for States. The event is intended promote participation in the treaty framework internationally and nationally.

“As is customary, Secretary-General Ban Ki-moon has invited heads of State and government present in New York for the opening of the 66th session [of the General Assembly] to demonstrate their continuing commitment to the rule of law by undertaking treaty actions with regard to the highlighted treaties or with respect to any of the other 550 for which he is a depository,” said Gabriele Goettsche-Wanli, the head of the Treaty Section of the UN Office of Legal Affairs (OLA), at a news conference at UN Headquarters.

This year’s event will be held on Tuesday, Wednesday and Thursday next week and the week that follows at UN Headquarters where heads of States and Government will be gathered for the high-level General Assembly session.

The event is entitled ‘Towards Universal Participation and Implementation’ and highlights some 64 treaties that address the status of refugees and the challenges of forced displacement and statelessness, human rights, disarmament and non-proliferation, the prevention and suppression of acts of terrorism and organized crime, as well as sustainable development and protection of the environment.

Since 2000, the annual treaties event has resulted in 1,591 new treaty actions, according to Ms. Goettsche-Wanli.

Udo Janz, the Director and Special Adviser to the UN High Commissioner for Refugees (UNHCR) in New York, told reporters that the UN refugee agency is this year encouraging States to sign, ratify or to accede the 1961 Convention on the Reduction of Statelessness and the 1951 Convention relating to the Status of Refugees. 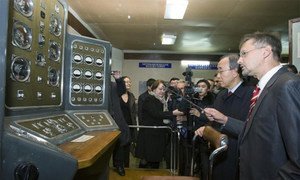 Warning that voluntary moratoriums on nuclear weapon tests are not enough, Secretary-General Ban Ki-moon today called on all Member States that have not yet done so to urgently ratify the United Nations-backed treaty banning them.