A senior United Nations peacekeeping official today urged both Kosovo and Serbia to demonstrate their full commitment to dialogue, reconciliation and peace, and refrain from unilateral action or the use of force in their latest dispute over the control of two border crossings.

“Today Council members have the opportunity to send a clear message that Pristina and Belgrade need to take responsibility for preventing the recurrence of violence in northern Kosovo tomorrow and in the future,” said Edmond Mulet, the Assistant Secretary-General for Peacekeeping Operations, briefing the Security Council on the situation in Kosovo.

“We are opposed to unilateral action on the one hand, and opposed to overheated rhetoric by any party on the other, including any action that would threaten the gains and the future of the dialogue,” said Mr. Mulet.

Authorities in Kosovo have announced plans to take control of two border posts on Friday, reigniting tensions between the two neighbours.

“We are very concerned that the implementation of the announced plans could lead to a hardening of positions on the ground, threaten stability and lead to another outbreak of violence,” said Mr. Mulet.

“Although not consulted on the substance of these plans by Pristina or any international interlocutors UNMIK [UN Interim Administration Mission in Kosovo] has proactively approached all sides to gather information, facilitate communication and send messages advocating calm, and discouraging unilateral action or the use of force and violence to both Belgrade and Pristina, as well as to the northern Kosovo Serb leaders,” he added.

He said the acting Special Representative of the Secretary-General for Kosovo, Farid Zarif, had also met with many key interlocutors to personally convey the same message, and had facilitated a meeting between the northern Kosovo Serb leaders and the deputy commander of the NATO-led Kosovo Force (KFOR).

At a news conference earlier today, Secretary-General Ban Ki-moon said he was deeply concerned over the public pronouncements on the establishment of the two customs control points and the impact the move could have on peace and stability in Kosovo.

“I call on all concerned to refrain from unilateral actions which could escalate tensions in the area. I urge Pristina and Belgrade to continue the European Union-facilitated dialogue and build on its success so far, and to take practical steps toward the implementation of the agreements reached so far,” said Mr. Ban.

He also urged both sides to make every effort to avoid escalation of tensions and prevent confrontation. “I expect that all international presences in Kosovo will discharge their mandated duties accordingly,” the Secretary-General added. 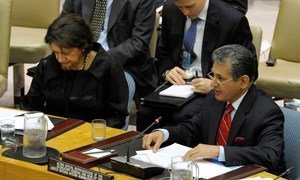 The recent troubles in northern Kosovo highlight the need for all sides to refrain from unilateral action that could escalate tensions and to resolve underlying issues through dialogue, a senior United Nations official told the Security Council today.