The United Nations Human Rights Council today appointed three experts to probe alleged abuses in Syria, where the number of people killed since the start of the Syrian Government’s crackdown on protesters earlier this year has now reportedly reached at least 2,600.

Sergio Pinheiro of Brazil will chair the independent commission of inquiry to investigate all alleged violations of international human rights law in Syria since March, when the pro-democracy protests began.

Mr. Pinheiro, a former professor and human rights expert for the Council, will be joined by Yakin Ertürk of Turkey, who is currently a professor of sociology and former UN official dealing with women’s issues, and Karen AbuZayd of the United States, who most recently served as head of the UN agency assisting Palestinian refugees.

The Geneva-based Council decided three weeks ago to dispatch a commission of inquiry after considering the report of a fact-finding mission by the Office of the High Commissioner for Human Rights (OHCHR).

The report outlined a litany of Government abuses ranging from murder, enforced disappearances, deprivation of liberty and the torture even of children to an apparent “shoot-to-kill” policy against protesters with snipers posted on rooftops.

As the Council opened its 18th session today, UN High Commissioner Navi Pillay told the 47-member body that, according to reliable sources on the ground, the number of those killed since the onset of the unrest in mid-March has now reached at least 2,600.

In addition to investigating the alleged human rights violations, the commission is tasked with establishing the facts and circumstances that may amount to such violations and of the crimes perpetrated and, where possible, identifying those responsible to ensure that perpetrators of violations, including those that may constitute crimes against humanity, are held accountable.

The commission is due to make public its findings to the Council as soon as possible, but no later than the end of November. 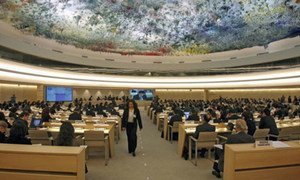 The top United Nations human rights body today called for an immediate end to all violence in Syria and decided to dispatch an independent international commission of inquiry to investigate alleged abuses committed during the Government’s crackdown on protesters.