A high-level Uruguayan delegation has arrived in Haiti to investigate the alleged sexual assault of an 18-year-old Haitian man by Uruguayan members of the United Nations peacekeeping mission in the Caribbean country.

At the same time, should the allegations prove true, the UN has procedures in place to support the victim with legal, medical and psychosocial aid, UN Stabilization Mission in Haiti (MINUSTAH) spokesperson Eliane Nabaa told a news conference in Port-au-Prince, the capital.

“While such behaviour is profoundly troubling and inexcusable, the actions of a few unfortunately have the effect of tarnishing those of thousands of others – military, police and civilians – who have served MINUSTAH and Haiti with distinction since 2004,” she said yesterday.

The four peacekeepers allegedly involved have been confined to barracks at the Uruguayan base in Les Cayes and the commander has been relieved of his duties by his country’s military.

The UN, which has long had a policy of zero tolerance towards sexual abuse by its peacekeepers, does not have the authority to prosecute as this comes within the jurisdiction of the troop-contributing country, Ms. Nabaa said. But she said it will follow up to closely monitor that the Uruguayan authorities have fulfilled their obligations.

She stressed that the UN does its utmost to prevent such abuses from occurring, including through training before troops are deployed to sensitize them to respect human rights and the customs, traditions and culture of the host country.

Ms. Nabaa cited the case of another Uruguayan peacekeeper who fathered a child in Haiti with a 16-year-old girl. He was sent back to his country, banned from serving in any other UN peacekeeping missions, and obligated by the Uruguayan authorities to support financially the mother and her child.

The 12,000-strong MINUSTAH has been in Haiti since mid-2004 after then president Jean-Bertrand Aristide went into exile amid violent unrest, and in his latest report, Secretary-General Ban Ki-moon calls for it to be extended for another year until 15 October 2012.

He notes that for the first time in its history, Haiti has witnessed a peaceful transition from one democratically elected president to another from the opposition, with the inauguration earlier this year of Michel Martelly. But he voices concern at the continuing stand-off between the executive and legislative branches, as well as the uncertainty surrounding constitutional reform.

“At a time when Haiti so desperately needs a committed leadership with a common set of priorities, antagonisms between opposing political forces are casting a shadow on the country’s recent democratic success and threatening its progress towards lasting stability,” he writes. “It is the responsibility of all actors to ensure that this trend is reversed and that the promising gains made in recent years are preserved.”

In the year ahead, MINUSTAH will as a matter of priority support the Haitian authorities, private sector and civil society actors in creating a viable framework for good governance, reform and development. 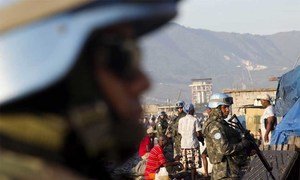 The United Nations said today that Uruguay should conduct a full and thorough investigation into allegations of sexual misconduct by its military personnel serving with the world body’s peacekeeping mission in Haiti.