Secretary-General Ban Ki-moon today wrapped up a four-nation visit to the South Pacific with a call for countries to “connect the dots” between issues such as climate change, food insecurity and water scarcity and work towards ensuring sustainable development for all.

“The sustainable development agenda is the agenda for the 21st century,” Mr. Ban told an audience at the University of Sydney in Australia, the last stop on a week-long trip that also took the United Nations chief to the Solomon Islands, Kiribati and New Zealand.

“We must keep working to fight poverty, create decent jobs, and provide a dignified life while preserving the planet that sustains us,” he stated. “Above all, that means connecting the dots between challenges such as climate change and water scarcity, energy shortages, global health issues, food insecurity and the empowerment of the world’s women.”

He noted that, while on the surface, these might seem like distinct issues, they are actually linked and it is necessary to find those linkages.

“As Australia knows too well,” he pointed out, “extreme weather events such as increased floods, rains and droughts continue to grow more frequent and intense as climate change accelerates. They not only devastate lives, but wipe out infrastructure, institutions, and budgets.”

Climate change is one of the greatest threats to the security, well-being and livelihoods of the peoples of the region. Mr. Ban got a first-hand look at the impact of rising sea levels on a visit to the low-lying island nation of Kiribati, where he also joined young people in planting mangroves on a beach to help fight coastal erosion.

The Secretary-General told the gathering in Sydney that scores of countries are heading down a lower-carbon path because they know it is good for their economies and good for the health and well-being of their people. He cited, among others, the Sustainable Sydney initiative to reduce carbon emissions in the city by 70 per cent over the next 20 years.

“These actions are vital on their own – but they can also inspire progress in the global negotiations, creating a virtuous cycle,” he stated. “This is a global race to save the planet. But it is also a race to see which countries and economies will forge the path to creating green sustainable jobs.

“I hope Australia will lead the way – for your own good, as well as that of our planet.”

Mr. Ban later travelled to the capital, Canberra, where he participated in a tree-planting event at the National Arboretum with young school children in an area that was burned out by a major fire in 2003.

“The United Nations is committed to make this world, this planet greener and greener,” he said, highlighting the UN Environment Programme (UNEP) campaign that aims to have at least one billion trees planted worldwide each year. Mr. Ban planted an olive tree, both as a symbol of peace and because it helps to cut greenhouse gas emissions which lead to global warming.

Also today, the Secretary-General met with Australian Defence Minister Stephen Smith, with whom he discussed strengthening UN-Australian cooperation in areas such as peacekeeping and human rights.

Australia was the first country to contribute troops to a UN peacekeeping mission, and since then has contributed to the cause of peace in countries ranging from Cambodia to Cyprus to Afghanistan.

Mr. Ban also visited the Australian Federal Police’s training school for police being deployed to international peacekeeping missions, and watched a training exercise in which police cadets played the part of rioters in a mock-Pacific Island village.

Later he met the Governor-General of Australia, Quentin Bryce, and attended a dinner in his honour at Government House during which he lauded the country’s strong support for the UN and its leadership on various issues. 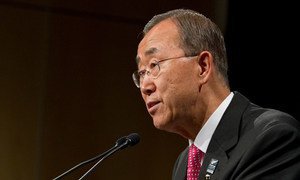 Secretary-General Ban Ki-moon and the leaders of Pacific island nations today called for urgent international action to reduce greenhouse gas emissions, stressing that climate change remains one of the greatest threats to the security, well-being and livelihoods of the peoples of the region.