Ensuring rights of persons with disabilities benefits all of society – Migiro

Persons with disabilities must enjoy full human rights and fundamental freedoms and enabling them to do so benefits society as a whole, Deputy Secretary-General Asha-Rose Migiro said today at the opening of a United Nations forum that is seeking to improve their lives.

“You and I and millions of others know, that when we respect the inherent dignity of persons with disabilities, we enrich our human family,” she stated in her remarks to the fourth session of the Conference of States Parties to the Convention on the Rights of Persons with Disabilities.

The conference, which runs through Friday, brings together over 500 participants around the overall theme of “Enabling development: realizing the rights of persons with disabilities.”

There are 103 States that are party to the Convention, which was adopted by the General Assembly in 2006 in an effort to ensure that persons with disabilities enjoy the same human rights as everyone else.

Ms. Migiro said that the large number of countries that have ratified the treaty is a testament to the growing global understanding of how important it is to redress the many challenges facing persons with disabilities.

“Now we have to take this understanding to the next level,” she stated. “That means giving this issue the attention it deserves far beyond this conference room. You can tell the world – and many of you can show the world – that persons with disabilities can make an enormous contribution to progress.”

The Deputy Secretary-General also noted that even today, almost five years after the adoption of the Convention, too many persons with disabilities do not even know that this historic instrument exists.

“Far too many are denied the rights it is supposed to guarantee. As long as they are denied those rights, we cannot rest,” she stated.

Among the issues that will be considered during the meeting are employment challenges faced by people with disabilities and international cooperation in the present global economic situation. 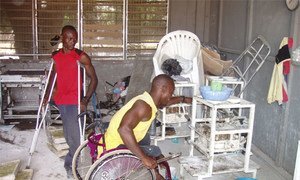 Hundreds of delegates from governments and civil society will gather at United Nations in New York tomorrow to discuss ways to improve the lives and well-being of people with disabilities by addressing some of the challenges they face, including unemployment.