The head of the United Nations Office on Drugs and Crime (UNODC) has had a meeting with a United States congressional delegation during which they discussed the situations in Mexico and Colombia, drug production and trafficking in Afghanistan, cyber security, money laundering, piracy and human trafficking.

Yury Fedotov, the UNODC Executive Director, and the US delegation took note of the interconnections between the various forms of illicit crimes across the globe, with the US legislators showing particular interest in the linkages between transnational organized crime, drug trafficking and terrorism, during the meeting at the UNODC headquarters in Vienna on Friday.

The congressional delegation voiced concern over organized crime, and were informed about the linkage between opium production in Afghanistan and the instability in the country, including the insurgency, and illicit money flows from piracy activities off the coast of the Horn of Africa.

The United States has been collaborating with UNODC in the UN agency's country programme for Afghanistan, while counter-piracy work has been ongoing, particularly under the Contact Group on Piracy off the Coast of Somalia of which the US has been a keen supporter.

“This meeting was of enormous help in strengthening the already good cooperation between UNODC and the United States in the areas of our mandate,” said Mr. Fedotov. “Hopefully, it is the first of many such discussions and we will continue to work together in areas of mutual interest,” he added.

Last year, the United States pledged $34.3 million to assist in implementing UNODC's work across the globe, and Washington is a lead supporter of the Office's programmes.

On the linkage between transnational organized crime, drug trafficking and terrorism, Mr. Fedotov stressed the need for an integrated approach to all forms of crime.

“UNODC is already doing everything possible to mainstream the issues of transnational organized crime both inside and outside the United Nations system and I am glad that the congressional delegates showed such a keen understanding of these trends,” said Mr. Fedotov. 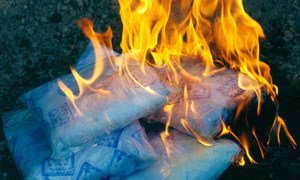 UN urges anti-drug measures for both Afghanistan and ‘consumer countries’

The head of the United Nations anti-drugs agency has called for strengthening border controls around Afghanistan – still the world’s leading producer of opium and heroin – boosting security in that country, and lowering demand in so-called “consumer countries.”