United Nations agencies and their partners are stepping up food distribution in refugee camps in Ethiopia that house people who have fled famine in neighbouring Somalia amid alarming malnutrition rates among children, the UN refugee agency reported today.

At the Kobe camp in Ethiopia’s Dollo Ado area, medical assessment of newly arrived refugees revealed that 19 per cent of children were suffering from severe acute malnutrition, according to Adrian Edwards, the spokesman for the UN High Commissioner for Refugees (UNHCR).

In the nearby Hilaweyn camps, a malnutrition rate of 16 per cent was recorded, while in Melkadida and Bokolmanyo camps, the rates were 10 and 7 per cent respectively, Mr. Edwards told reporters in Geneva.

Severe acute malnutrition poses a risk to the lives of children under the age of five. UNHCR considers a rate of over one per cent to be alarming.

“After consulting with the refugee community, awareness-raising campaigns will be conducted to encourage refugees to access health services. Outreach workers will go from tent to tent and look for malnourished children who are not enrolled in the feeding programmes,” he said. The aid workers will also trace children who may have dropped out of nutritional feeding treatment.

Meanwhile, a convoy of UNHCR trucks delivering essential relief supplies for an estimated 18,500 refugees in the Gode area of Ethiopia, some 250 kilometres north of Dollo Ado, reached its destination on Wednesday.

UNHCR officials also learned from the local authorities in Gode that some of those previously assumed to be refugees are actually displaced inside Somalia in an area where the border is not clearly demarcated.

In Kenya, the new school term starts on Monday, and at Dadaab, the largest refugee settlement in the world, some 40,000 refugee children are preparing to go to school – many of them for the first time.

There have been 154,000 new refugees who have entered Kenya from Somalia so far this year and more than half of them are children who will need more classrooms, desks, stationery, textbooks and teachers.

For the 156,000 school-age children in the three Dadaab camps, there is currently only one teacher for every 100 pupils and most of the teachers are themselves refugees. Enrolment remains low at 42 per cent for primary and five per cent for secondary school.

The enrolment rate for girls is even lower, at 33 per cent for primary school. Overall, some 75 additional schools, or 1,800 classrooms, are urgently required.

Few of the newly-arrived refugee children have had any formal education in Somalia. To smooth their transition into schooling, UNHCR’s partner agency, CARE, recently began an accelerated learning programme to teach basic literacy and numeracy skills. Some 1,500 children between the ages of 5 and 13 are benefiting from the programme. 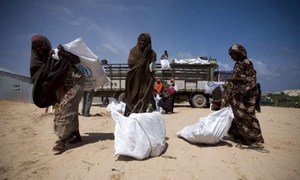 The United Nations refugee chief has called for a rapid increase in aid for Somalis uprooted by drought, famine and conflict, as he visited the capital, Mogadishu, which is hosting some 400,000 internally displaced persons (IDPs).