The recent troubles in northern Kosovo highlight the need for all sides to refrain from unilateral action that could escalate tensions and to resolve underlying issues through dialogue, a senior United Nations official told the Security Council today.

The Secretary-General’s acting Special Representative for Kosovo, Farid Zarif, said the situation remains “tense and unpredictable” after the clashes of late July between ethnic Serbs and ethnic Albanians.

On 25 July, Kosovo authorities attempted to take control of two northern boundary crossing points. One person died in the ensuing violence that took place between them and the northern Kosovo Serbs.

“Although the situation was contained and further loss of life prevented, we should note that the events which took place in northern Kosovo last month were the most serious security incidents since the violence in 2008,” Mr. Zarif told the Council.

“They serve as a stark reminder that the issues underlying these incidents remain unresolved and constitute a serious threat to Kosovo’s peace and security,” he added. “It remains essential therefore that all sides refrain from any unilateral action, which could escalate tensions.”

Mr. Zarif, who presented the latest report (S/2011/514) of the Secretary-General on the UN Interim Administration Mission in Kosovo (UNMIK), stressed the need for all sides to work together to avoid any further deterioration of the situation and allow progress to be made through dialogue.

UNMIK ran Kosovo from 1999, when NATO forces drove out Yugoslav troops amid bloody ethnic fighting between Serbs and Albanians, until 2008, when Kosovo declared its independence from Serbia. Serbia has not recognized it.

While tensions in the north did not spill over into the rest of Kosovo, there was an increase in cases of intimidation of Kosovo Serbs and attacks on their property, noted Mr. Zarif.

“We are of the belief that the recent troubles must be a wake-up call to all that rebuilding trust and promoting inter-community cooperation and understanding cannot be further postponed,” he said.

“There is a pressing need for leaders on both sides to speak the language of peaceful co-existence and reconciliation and to accompany their words with concrete actions.”

Serbia’s Foreign Minister Vuk Jeremic said the events of last month led to the situation in the region becoming less secure, less stable and less predictable. “I urge the Security Council to send a clear message to the perpetrators that their unilateralism is totally unacceptable,” he said, adding that peace and security in Kosovo is the responsibility of the Council, as per resolution 1244, which set up UNMIK in 1999.

“We sent Kosovo police forces to our northern borders neither to disturb citizens nor to attack them,” stated Enver Hoxhaj, representing Kosovo. “We simply wanted to reinforce measures of reciprocity in trade when all attempts to negotiate the matter had failed.” He added that Kosovo police did not use violence, and that it was the Serbian Government that “committed acts of violence inside the territory of Kosovo.” 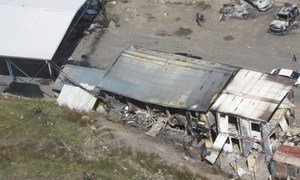 Secretary-General urges restraint in Kosovo after clashes in north

Secretary-General Ban Ki-moon today called for restraint and calm in Kosovo, where inter-ethnic tensions between Serbs and Albanians are particularly high after repeated clashes in the north earlier this week.