On eve of Horn of Africa pledging conference, UN calls for generous donations

Senior United Nations officials are calling on countries, businesses and individuals to give generously to support efforts to tackle the food security crisis gripping the Horn of Africa, warning that the world cannot “afford to lose momentum” in the fight against famine, disease and starvation.

As the continent’s leaders prepare to gather in Addis Ababa tomorrow for a pledging conference hosted by the African Union, Deputy Secretary-General Asha-Rose Migiro said all segments of society – including governments, the public, non-governmental organizations (NGOs) and the private sector – need to play their part in dealing with the crisis.

“We ask you, we ask everybody to make donations to multilateral efforts, pooled international funds, so that we can jointly identify where the needs are greatest and how that money should be spent,” Ms. Migiro told UN Radio ahead of the pledging conference, which she will address. “We also need your help in getting the access we need to allow us to save lives.”

Ms. Migiro noted that the international response to the crisis – which is affecting Ethiopia, Kenya and Djibouti, but Somalia in particular – is accelerating, despite restrictions and security concerns in some parts of Somalia.

“In areas where Western and UN agencies have not been able to gain access, many Islamic organizations have arrived and are responding to the needs,” she said.

More than 12 million people across the region are estimated to need outside humanitarian assistance, and a state of famine has been formally declared in five regions of southern and central Somalia, including the area in and around the capital, Mogadishu.

Some 3.2 million Somalis are thought to be on the brink of starvation, and the UN and its aid partners say another billion dollars is needed to pay for humanitarian operations across the region.

“We cannot surely afford to lose momentum,” Ms. Migiro stressed, noting that famine could spread to other areas of Somalia within the next four to six weeks.

Kanayo Nwanze, the President of the UN International Fund for Agricultural Development (IFAD), issued a statement ahead of the pledging conference in which he emphasized that Africa itself must play a pre-eminent role in ending the crisis.

“I have said before that Africa should not wait for the international community to solve its problems,” he said. “Africa will conquer hunger when African governments give Africans the tools and resources they need to feed themselves. Change – real change – comes from within.”

Ms. Migiro, for her part, welcomed the efforts of the AU in staging the pledging conference.

“They have shown that they are ready and willing to come together during a moment of profound challenge and raise the resources needed to end the suffering,” she said.

Mohamadou Mansour N’Diaye, the chef de cabinet of the UN Convention to Combat Desertification, described tomorrow’s meeting as a positive step and said that the Horn of Africa’s drylands can prosper, despite the current situation.

“It is not too late to act because we know and have the tools to better manage the drylands,” Mr. N’Diaye said. “The productivity and prosperity in other dryland parts of the world, such as the North American Great Plains, the Pampas of Argentina, and the wheat-belts of Russia, Ukraine and Kazakhstan, should put to rest the myth that the drylands are empty, barren places worth little.” 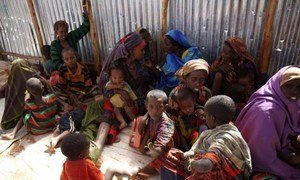 The United Nations has deployed an emergency team to south-eastern Ethiopia where 18,000 new refugees fleeing drought, famine and conflict in Somalia have recently poured in, compounding a situation already fraught with high mortality from malnutrition and measles.