Secretary-General Ban Ki-moon today stressed the need for maintaining national unity and fostering reconciliation in Libya when he spoke with the leader of the North African country’s National Transitional Council, Mustafa Abdul-Jalil.

The Secretary-General also spoke of the need to protect diplomatic premises in Libya during the telephone conversation with Mr. Abdul-Jalil, who for his part, expressed appreciation for the United Nations’ engagement in Libya.

The regime of Colonel Muammar al-Qadhafi is reported to be on the brink of collapse as rebels who have been seeking his ouster gained control of parts of the capital, Tripoli, amid heavy fighting in the city.

Mr. Abdul-Jalil told Mr. Ban that the National Transitional Council appreciated the role played by the Secretary-General’s Special Envoy for Abdel-Elah al-Khatib, adding that Libya will need UN support during the post-conflict period.

Mr. Ban has been speaking to a number of world leaders, including the heads of regional and international organizations, over the past two days in an effort to coordinate the international response to the recent developments in Libya, his spokesperson told reporters at UN Headquarters.

All of his interlocutors underlined the importance of the UN taking a lead role on behalf of the international community to help the Libyan people face the challenges ahead.

The Secretary-General has invited the heads of the League of Arab States, the African Union, the European Union and the Organization of Islamic Cooperation for a meeting on Libya in New York on Friday.

The meeting has been convened to develop the international community’s response in support of Libya during the transitional period.

Mr. Khatib and Ian Martin, the Secretary-General’s Special Adviser on post-conflict planning in Libya, are in Doha, Qatar, today for discussions with the National Transitional Council’s leadership on the form assistance the UN can lend to the transitional authorities and the people of Libya.

The Under-Secretary-General for Political Affairs, B. Lynn Pascoe, was meanwhile, due to discuss recent political developments in Libya with the Security Council later today. 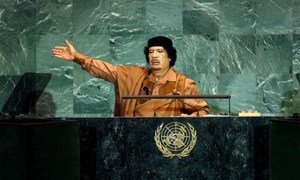 With signs that the conflict that has raged in Libya for more than six months may soon end, Secretary-General Ban Ki-moon today appealed for a smooth and peaceful transition and pledged the assistance of the United Nations for the people of the North African nation.