US must do more to protect women from domestic violence, UN rights expert warns

The United States must do more to protect women from domestic violence after a regional body found it wanting in defending a battered woman and her three murdered children from her ex-husband, an independent United Nations human rights expert warned today.

“The US Government should reassess existing mechanisms for protecting victims and punishing offenders, and establish meaningful standards for enforcement of protection orders and impose consequences for a failure to enforce them,” the UN Special Rapporteur on violence against women, its causes and consequences, Rashida Manjoo, said.

The case at issue involves Jessica Lenahan, a victim of domestic violence along with her daughters Leslie, Katheryn and Rebecca Gonzales, ages seven, eight and 10, who obtained a restraining order against her ex-husband Simon from the Colorado state courts in 1999.

Not knowing where her daughters were, Ms. Lenahan contacted Castle Rock Police Department eight times on the evening of 22 June and the morning of 23 June 1999. That morning, Simon Gonzales drove his pick-up truck to the department and fired through the window. In an exchange of gunfire he was killed. The dead bodies of the three girls were found in his truck.

The Inter-American Commission on Human Rights (IACR) found that the fragmented police response did not respect the terms of the restraining order, and that Colorado state did not duly investigate Ms. Lenahan’s complaints. It called on the US to conduct a full investigation into these systemic failures and reinforce through legislation the mandatory character of protection orders.

Ms. Manjoo noted that she conducted a fact-finding mission to the US earlier this year. “In my discussions with Government officials, victims, survivors, and advocates, including Jessica Lenahan, I found a lack of substantive protective legislation for domestic violence victims in the United States, as well as inadequate implementation of certain laws, policies and programs,” she said.

Ms. Manjoo acts in an independent, unpaid capacity and reports to the UN Human Rights Council in Geneva. 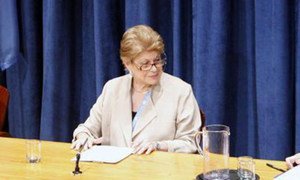 Suppression of women’s rights persists despite progress on discrimination – UN

The United Nations committee tasked with ensuring compliance with the global treaty to end discrimination against women today noted that there has been progress towards improving the lot of women in some countries, but discriminatory practices continued to limit their human rights.