Secretary-General Ban Ki-moon once again today stressed the need to accelerate efforts to accomplish the global poverty eradication and social development targets, urging all partners, including the private sector and civil society, to work with governments to ensure the goals are achieved by the 2015 deadline.

“Time is running out on our 2015 deadline. Now is the moment to sprint to the finish,” said Mr. Ban, speaking at the opening in New York of an international photo exhibition sponsored by the Yonhap News Agency of the Republic of Korea on the Millennium Development Goals (MDGs), the global plan to reduce extreme poverty and hunger, infant and maternal mortality, disease, and promote universal access to basic education and health care.

Mr. Ban said he was pleased that the photos will be shown in exhibitions in various parts of the world. “Wherever it goes, people will see why the MDGs are so important. To end poverty, hunger and illness – to expand opportunity, equality and hope,” he said.

He expressed his gratitude to Yonhap New Agency for using the power of photojournalism to promote development.

“It is remarkable that 55,000 photos were submitted from more than 70 countries around the world. That alone raised awareness,” said the Secretary-General. Proceeds from the exhibitions, whose theme is “Share the Moment, Share the Future,” will be donated directly to international relief activities.

“The winning images have universal value. They communicate immediately and equally to all people. The images may make you angry ? or sad. But above all they should make you resolved to end this suffering and reach our Goals for the future that we all share,” he added. 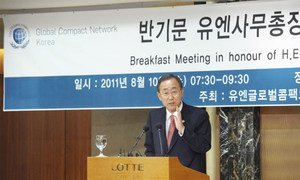 Secretary-General Ban Ki-moon today exhorted the world’s academic community to find solutions to global hunger and malnutrition, come up with ideas to promote sustainable and inclusive development, and advance tolerance through mutual respect and understanding.