Global conservation experts concluded a United Nations-backed meeting in Geneva today with important decisions to protect a number of endangered species, including the launch of a trust fund to ensure the long-term survival of the African elephant population.

Several countries have already contributed to the multi-donor technical trust for the implementation of an African Elephant Action Plan, and more were encouraged to do so by the participants of the meeting of the Standing Committee of the Convention on International Trade in Endangered Species of Wild Fauna and Flora (CITES).

“We expect that donors will hear the urgent needs of Africa and support the implementation of the African Elephant Action Plan,” said John E. Scanlon, Secretary-General of CITES, whose secretariat is administered by the UN Environment Programme (UNEP).

“The target is to raise $100 million over the next three years to enhance law enforcement capacity and secure the long-term survival of African elephant populations,” he added.

Elephant conservation and new financial mechanisms were among several issues on the agenda of the week-long meeting, in addition to measures to reduce current levels of poaching of rhinos, tigers and other big cats, illegal trade in mahogany and other timber species, the fate of sturgeon and the caviar trade, and the sourcing of reptile skins used in the leather industry.

It also recognized rhinoceros poaching and illegal trade in their horns as a major challenge that requires innovative approaches, with one delegation describing the situation “as almost out of control.”

All populations of rhinoceroses are suffering from poaching, particularly those in the Democratic Republic of the Congo (DRC), India, Mozambique, Nepal, South Africa and Zimbabwe, with the illegal trade in rhinoceros horns appearing to be the main motive.

The committee also reviewed efforts by Peru in establishing reliable timber verification systems, and new rules for introducing marine species from international waters, among other topics.

Some 175 States have joined CITES, an international agreement that entered into force in July 1975 and aims to ensure that global trade in specimens of wild animals and plants does not threaten their survival.

♦ Receive daily updates directly in your inbox - Subscribe here to a topic.
♦ Download the UN News app for your iOS or Android devices.
CITES

UN-backed meeting seeks to clamp down on poaching of elephants, rhinos 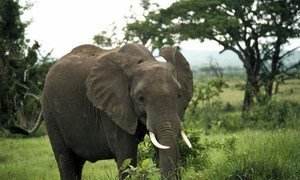 UN-backed meeting seeks to clamp down on poaching of elephants, rhinos

Faced with increased poaching and illegal trade in ivory and horns of elephants and rhinoceroses, 300 government and civil society experts worldwide are seeking to strengthen conservation with new financial mechanisms at a United Nations-backed meeting in Geneva this week.