Nearly 330,000 have returned to South Sudan since the end of October last year from neighbouring Sudan, the United Nations humanitarian agency reported today, saying that most of the returnees were arriving by bus, train or river barge.

South Sudan became independent from Sudan on 9 July, becoming Africa’s newest State. The secession followed a referendum in January when the overwhelming majority of southerners elected to become independent, six years after a landmark peace agreement ended decades of war between the north and the south.

Since the end of July, some 7,200 returnees have received 15-day food rations, the UN Office for the Coordination of Humanitarian Affairs (OCHA) said in an update. Shortages of non-food items, such as mosquito nets, have eased with the arrival of additional supplies, it added.

Aid agencies are rehabilitating latrines and supporting vaccination for some 3,000 new returnees who have arrives at the Juba river port on transit to Eastern and Western Equatoria states. Food, water and health services are also being supplied in Juba before those returning continue their journey to their areas of origin.

Some 2,800 people have arrived in Pariang county, Unity State, where aid agencies airdropped 34 tons of food, enough to feed 2,500 people for on month, between 7 and 11 August.

Reports of interference with relief efforts continue to be received in Warrab state. Solders have forced UN and non-governmental organization (NGO) vehicles to stop, often at gunpoint, and give lifts to armed and uniformed men on at least five occasions over the past week. 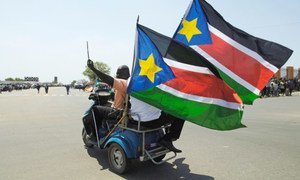 South Sudan, the world’s newest country, has some of the worst development indicators on the planet, a senior United Nations official said today, pledging the Organization’s assistance to help the nation achieve its main goals in the aftermath of independence.