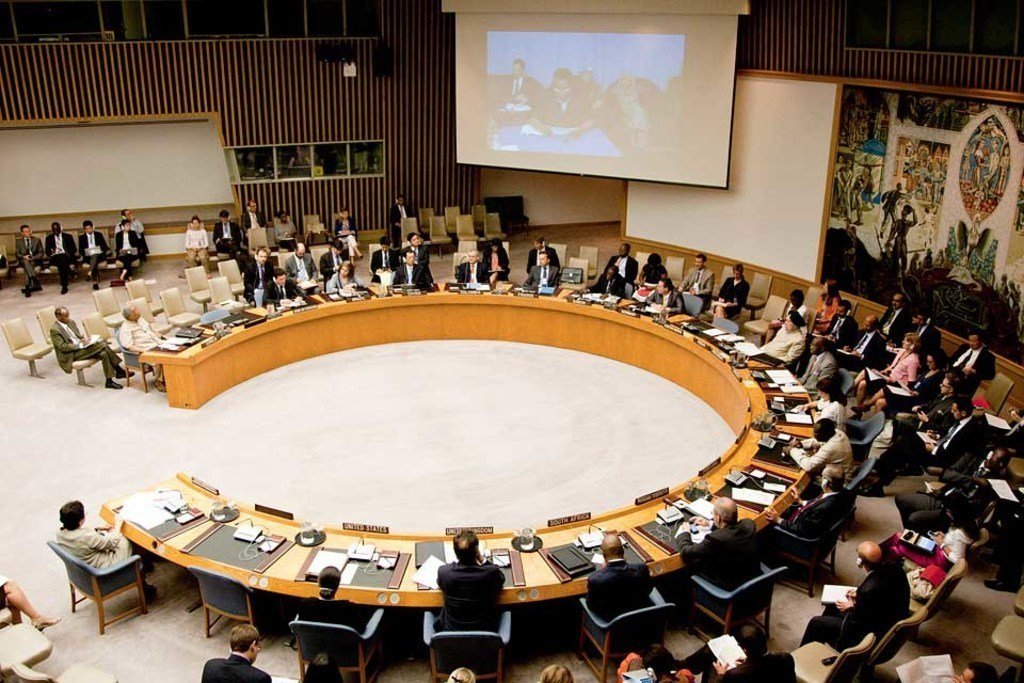 Augustine Mahiga (on screen), Special Representative of the Secretary-General for Somalia, briefs the Security Council
15 August 2011
Peace and Security

The Security Council today stressed the need for all Somali groups to participate in next month’s consultative meeting convened to seek agreement on a roadmap on key priorities to be implemented over the next year by the country’s Transitional Federal Institutions (TFIs).

The Council voiced its strong support for the work of Augustine Mahiga, the Special Representative of the Secretary-General for Somalia, who is facilitating the consultative meeting – scheduled to be held inside the country from 4 to 6 September.

The conference is expected to come up with “clear timelines and benchmarks to be implemented by the Transitional Federal Institutions,” the Council said in a press statement read out by Ambassador Hardeep Singh Puri of India, which holds the Council’s rotating presidency this month.

Somali groups expected to be represented in the meeting include the TFIs, local and regional administrations and other stakeholders.

The Council urged all participants to “engage constructively and responsibly in this meeting and stressed the importance of agreeing the roadmap in a timely manner.” The 15-member United Nations body emphasized that “future support to the TFIs would be contingent upon completion of the tasks in the roadmap.”

Members of the Council welcomed the recent improvements in the security situation in the Somali capital, Mogadishu, and commended the efforts of African Union peacekeeping mission (AMISOM) and the country’s security forces, recognizing the significant sacrifices made by the troops.

The Council urged TFIs to immediately capitalize on the security gains by urgently focusing on the delivery of basic services and providing good governance to all citizens.

“The members of the Security Council stressed the importance of predictable, reliable and timely resources for AMISOM in order for it to better fulfil its mandate. They called upon the international community to make contributions urgently to AMISOM, without caveats,” the statement said.

The Council reiterated its grave concern at the continued instability in Somalia, which has led to many problems, including terrorism, piracy, hostage-taking and a dire humanitarian situation. It underscored the need for the quick implementation of all relevant Security Council resolutions, including by the TFIs.

It stressed the need for a comprehensive strategy to encourage peace and stability through the collaborative efforts of all stakeholders.

The Council reiterated its grave concern over famine conditions in several parts of Somalia and welcomed the mobilisation of the international community, urging Member States to contribute to the UN Consolidated Appeal for Somalia.

It urged all parties and armed groups to “ensure full, safe and unhindered access for the timely delivery of humanitarian aid to persons in need of assistance across Somalia, and to take appropriate steps to ensure the safety and security of drought-affected populations and humanitarian personnel and supplies.”

In a related development, the UN World Food Programme (WFP) said it had, through its monitoring systems, uncovered possible theft of food aid and had launched investigations.

The agency said that it had put in place strengthened and rigorous monitoring and controls for its in relief operations in Somalia, but given the lack of access to some areas because of security concerns and restrictions, humanitarian supply lines remain highly vulnerable to looting, attacks and diversion by armed groups.

It condemned all parties who would use the desperation of the hungry to block, attack, or divert life-saving humanitarian supplies for their own benefit.

Recent political and military improvements in war-torn Somalia offer an “extraordinary moment” of opportunity for progress and great challenges, including from warlords and terrorists, the top United Nations envoy in the country said today, urging the world community to provide more financial and logistical support.