Economic governance, globalization and the role of the United Nations topped the agenda during a one-day visit today to Argentina by General Assembly President Joseph Deiss.

While in Buenos Aires, Mr. Deiss met with Argentine Foreign Minister Héctor Timerman, key lawmakers in the national Parliament, young diplomats and the UN Resident Coordinator and other UN staff.

Mr. Deiss and Mr. Timerman discussed a series of issues, including the world economic situation, the UN’s role in global governance, Security Council reform and the situation in Haiti, according to a statement issued by the Assembly President’s spokesperson.

In a meeting with members of the Foreign Affairs Committee of the Argentine Parliament’s Chamber of Deputies, Mr. Deiss stressed the importance of interaction between the UN and national parliaments, and also with the Inter-Parliamentary Union (IPU).

The “green economy, global economic governance and the current economic situation, migration in a global world, the situation in the Middle East as well as the roles of Argentina [current chair of the Group of 77 and China] and of Latin America in a globalized world were discussed,” according to a statement.

Mr. Deiss – who steps down as Assembly President next month after a year-long stint – visited Argentina after a similar trip earlier this week to neighbouring Chile.

♦ Receive daily updates directly in your inbox - Subscribe here to a topic.
♦ Download the UN News app for your iOS or Android devices.
deiss 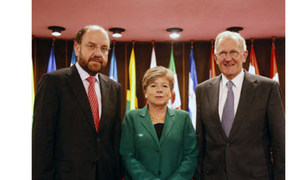 The main bodies of the United Nations such as the Security Council and the Economic and Social Council (ECOSOC) must be reformed if the Organization is to play its rightful role in achieving more effective global governance in the in the 21st century, General Assembly President Joseph Deiss has warned.