UN through the lens: Three years at the helm of peacekeeping

Under-Secretary-General for Peacekeeping Operations Alain Le Roy briefs reporters on the situation in Haiti after the devastating earthquake that hit the country on 12 January 2010.
10 August 2011

Demand for United Nations-led peacekeeping operations is likely to continue over the next five years and may even start to rise again as individual countries reduce their defence spending and fresh crises and conflicts emerge, the outgoing head of UN peacekeeping has said.

Alain Le Roy, whose last day as Under-Secretary-General for Peacekeeping Operations is today, told the UN News Centre in a farewell interview that the number of peacekeepers in the field is not falling, just a year after many thought that UN peacekeeping was entering a period of consolidation.

“We will have some reduction in the coming years, but maybe there will be other situations requiring UN peacekeeping,” he said. “We don’t know what’s happening in the Middle East and I’m sure that will have some impact on our peacekeeping operations in some ways.”

More than 120,000 peacekeepers are spread across 15 operations worldwide, ranging from Haiti and Kosovo to Timor-Leste and South Sudan.

Mr. Le Roy noted also that the defence budgets of many nations are being reduced as a result of the ongoing global economic and financial problems.

“So all that will probably mean that the demand on the UN and on UN peacekeeping will continue to be there, if not to grow.”

Given that rising or steady demand, Mr. Le Roy warned that it was vital that UN operations have the right military and civilian capabilities to tackle “the increasing complex situations and tasks that peacekeeping is facing.”

In the Newsmaker interview Mr. Le Roy – who is stepping down from his post to spend more time with his family – also discussed some of the major crises that occurred during his period as Under-Secretary-General. These crises include: the devastating earthquake in Haiti in January 2010, which killed many staff serving with the UN peacekeeping operation (MINUSTAH); the surge in violence in the eastern Democratic Republic of the Congo (DRC) in late 2008; and the aftermath of disputed elections in Côte d’Ivoire in 2010-11.

♦ Receive daily updates directly in your inbox - Subscribe here to a topic.
♦ Download the UN News app for your iOS or Android devices.
Alain+Le+Roy 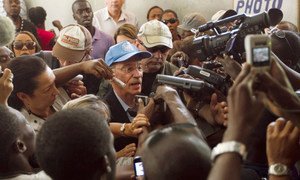 UN through the lens: Looking back on a year in Haiti