Ban welcomes measures announced by US to help prevent genocide

The steps recently announced by President Barack Obama of the United States to strengthen his Government’s capacity to help prevent genocide and other mass atrocities are “promising” initiatives, said Secretary-General Ban Ki-moon.

“If the responsibility to protect is to become fully operational, the solemn commitments undertaken by Member States at the United Nations will have to be matched by innovative and sustained measures at the national level,” said a statement issued last night by Mr. Ban’s spokesperson.

“In that regard, the establishment of an inter-agency Atrocities Prevention Board, the measures to end impunity, and the review of US policies and capacities are promising initiatives,” it added.

Agreed at a summit of world leaders in 2005 and sometimes known as ‘R2P’, the principle of the responsibility to protect holds States responsible for shielding their own populations from genocide, war crimes, ethnic cleansing, and related crimes against humanity and requires the international community to step in if this obligation is not met.

At a General Assembly meeting held last month, the Secretary-General had called for a concerted international effort to develop a mechanism for applying the principle to ensure that this century becomes the first one whose history is not “written in the blood of innocents.”

Mr. Ban has been encouraged by other important initiatives in addition to those announced by the US leader on 4 August, according to yesterday’s statement.

Under a responsibility to protect framework, Costa Rica, Denmark and Ghana have established a network of focal points in Member State capitals for the prevention and halting of mass atrocities. Argentina, Switzerland and Tanzania have convened a series of regional conferences on the prevention of genocide.

“The Secretary-General looks forward to working with all Member States, regional and sub-regional arrangements, and civil society on early and coordinated action to prevent mass atrocities,” the statement added. 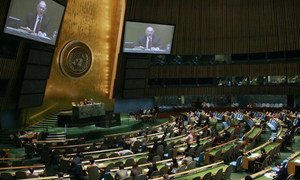 Secretary-General Ban Ki-moon today called for a concerted international effort to develop a mechanism for applying the principle of the global responsibility to protect to ensure that this century becomes the first one whose history is not “written in the blood of innocents.”