As aid agencies continue to scale up their response to the dire humanitarian situation in the Horn of Africa, the United Nations Children’s Fund (UNICEF) is appealing to the air transport sector to provide free and discounted cargo space to bring emergency food supplies into the region.

“Commercial air transport costs as much as the value of the food,” Marixie Mercado, UNICEF’s spokesperson in Geneva, told a news conference there.

British Airways, Lufthansa, UPS Virgin and Cargolux have already offered free or discounted cargo space, and UNICEF is appealing to other carriers to help transport food aid from Europe to the region to help children who will die without it.

Drought in the Horn of Africa has ravaged large areas of Somalia, Kenya, Ethiopia and Djibouti, leaving an estimated 12.4 million people in need of humanitarian aid. UN agencies and their partners are seeking $1.4 billion so they can scale up their response to the hunger crisis, which has already claimed tens of thousands of lives.

Yesterday UN humanitarian chief Valerie Amos warned that the famine in two areas of southern Somalia could spread to five or six more regions unless there is a massive increase in funding.

Ms. Mercado stated that more than half of the 2.3 million acutely malnourished children in the Horn of Africa could die unless they are fed within weeks.

Every month, UNICEF had about 5,000 tons of therapeutic and supplementary food to move from warehouses in Belgium, France and Italy – enough to feed 300,000 malnourished children.

This food has to be brought into Nairobi as quickly as possible, and bringing it by air is extremely costly, she noted. The other alternative is to transport the food via sea, for which UNICEF is setting up a pipeline, but that would take several more weeks.

“The caseload is quite extraordinary,” said Louis-Georges Arsenault, UNICEF’s Director of Emergency Programmes, who just returned to New York from a trip to the Horn of Africa. “Having the airlines to support us would be most welcome, and I think there’s a lot of goodwill out there to do just that.”

The Office of the UN High Commissioner for Refugees (UNHCR) said today that its ability to deliver much-needed aid is being hampered by the ongoing fighting in the Somali capital, Mogadishu.

There were already more than 370,000 internally displaced persons (IDPs) in Mogadishu before the recent drought- and famine-related displacement, which has driven some 100,000 others into the war-ravaged city, according to the agency.

“The ongoing offensive is negatively affecting the ability of UNHCR and other partners to deliver assistance to populations in distress at a time when their needs are most urgent,” said UNHCR spokesperson Fatoumata Lejeune-Kaba. “We need to maintain access to these people.”

Meanwhile, the flow of refugees from Somalia into Kenya continues unabated, with more than 40,000 Somalis arriving in the Dadaab refugee complex – already the largest and most congested in the world – in July. This is the highest monthly arrival rate in the camp’s 20-year history, UNHCR said.

The UN Food and Agriculture Organization (FAO) said it is continuing to work in areas affected by the hunger crisis, especially in Somalia where other agencies had severe access problems. The agency is trying to provide cash-for-work programmes, helping famine-hit farmers and herders in Somalia to feed their families.

FAO is following this up with the distribution of seeds and tools, water trucking, vaccination and treatment of animals, meaning that households could quickly resume their farming and livelihoods production in time for the coming rains in September and October, spokesperson Sandra Aviles told reporters.

She also warned that the existence of large displaced populations was placing an enormous strain on the host communities in Kenya and Ethiopia, along with the natural resources of the surrounding areas, and could lead to tension over access to vital resources. 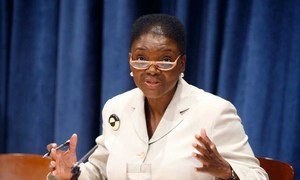