“Unless we see a massive increase in response, the famine will spread to five or six more regions,” Valerie Amos, the Under-Secretary-General for Humanitarian Affairs, told reporters at UN Headquarters. “Tens of thousand of Somalis have already died and hundreds of thousands face starvation,” she said.

She said the drought in the Horn of Africa, which has also ravaged large areas of Kenya, Ethiopia and Djibouti, leaving an estimated 12.4 million people in need of humanitarian aid, is the worst in 60 years.

“As of mid-year, around half of that money had been raised, and as of last week donors had committed more than $1 billion,” said Ms. Amos.

“It is not enough,” she added. “But neither was the crisis ignored as some have suggested. And even as we ask ourselves some important questions we can’t allow those to distract from the task at hand. We need to deal with the here and now as well as with the longer term.”

She said $1.4 billion is needed immediately to enable relief organisations to scale up response to the hunger crisis in the region. Ms. Amos urged traditional donors, who, she said, have already contributed generously, to provide additional resources, while appealing to corporations, foundations and private individuals to assist as well.

She urged parties to Somalia’s conflict to uphold international humanitarian law to enable aid workers to deliver assistance to those in need.

She said that the UN will support a plan by the African Union to hold a funding conference for the Horn of African hunger crisis later this month. 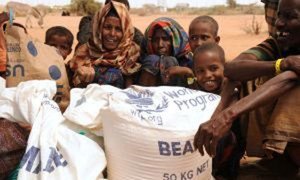 The United Nations today appealed for a further $1.4 billion to save the lives of some 12 million people across the Horn of Africa stricken by a worsening drought, and to stop the crisis from becoming an “even bigger catastrophe.”