A year after devastating monsoon floods hit Pakistan, for which the United Nations Children’s Fund (UNICEF) launched one of its largest operations, the agency today reported it faces a shortfall of more than $50 million to meet the continuing critical needs of the country’s children.

The agency said it continues to provide assistance to the victims of the floods that submerging almost one-fifth of the country, disrupted the lives of some 20 million people, claimed 2,000 lives and destroyed 1.6 million homes across the provinces of Baluchistan, Khyber Pakhtunkhwa, Punjab and Sindh.

“The impact of the floods will continue to be felt for years to come, especially by children who are the most vulnerable to the impacts of disaster,” the agency said. “When displaced children and their families returned to their areas of origin, they found homes, livelihoods, and infrastructure – including health facilities and almost 10,000 schools – damaged or destroyed.”

“If children remain untreated for malnutrition, for example, they are more susceptible to disease as well as life-long stunting and cognitive impairment.”

According to the agency’s press statement, “UNICEF faces a shortfall of almost $50 million to meet the critical early recovery needs of flood-affected children and families. The major areas of under-funding are in water, sanitation and hygiene, education, and health.”

In addition, $6.2 million is needed for nutrition interventions due to the continued humanitarian levels of malnutrition. 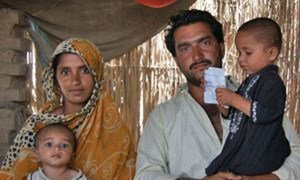 The United Nations today pledged its continued assistance to the people of Pakistan as they rebuild their lives one year after the country faced devastating floods – the largest natural disaster in its history.