UN urges anti-drug measures for both Afghanistan and ‘consumer countries’

The head of the United Nations anti-drugs agency has called for strengthening border controls around Afghanistan – still the world’s leading producer of opium and heroin – boosting security in that country, and lowering demand in so-called “consumer countries.”

Yury Fedotov, Executive Director of the UN Office on Drugs and Crime (UNODC), said in an introduction to a new study, Global Afghan Opium Trade – A Threat Assessment, that curtailing the Afghan illegal drug trade would “benefit the Afghan people, the wider region and the international community as a whole.”

“Trafficking in Afghan opiates is… very lucrative, generating some $61 billion in illicit funds in 2009 out of $68 billion for the global illicit opiate trade,” according to the report.

“Most of this money went into the pockets of traffickers all along the transnational heroin distribution routes, and some went to insurgents.” Afghan farmers earn relatively little from the trade, the report noted.

Spanning a decade, the report states that some 16.5 million people annually abuse opiates worldwide. Heroin takes the bulk of the market, with 12 million to 13 million people consuming 375 tons of heroin per year; of that, 150 tons are consumed in Europe.

“Strengthening border controls at the most vulnerable points, such as along Afghanistan’s border with Pakistan’s Baluchistan province, could help stem the largest flows of heroin, opium and precursor chemicals,” Mr. Fedotov said.

“Increasing the capacity to monitor and search shipping containers in airports, seaports and dry ports at key transit points and in destination countries could improve interdiction rates.”

He also suggested a need for building capacity and fostering intelligence sharing between ports and law enforcement authorities in key countries and regions, adding: “Addressing Afghan opium and insecurity will help the entire region, with ripple effects that spread much farther.”

“But addressing the supply side and trafficking is not enough,” he said. “We need a balanced approach that gives equal weight to counteracting demand for opiates. This is also part of the international community’s shared responsibility for the global drug problem: heroin-consuming countries need to do more to provide treatment, care and support for drug users to help them kick the habit, and also to prevent drug use.”

The study’s other findings include:

Opiate consumption in Afghanistan and neighbouring countries has risen sharply in the past decade – 35,000 out of the current 123,000 hectares under poppy cultivation in Afghanistan are needed to produce opiates for this region alone. But the problem extends far beyond, with Afghan heroin spreading to consumer markets in East Asia traditionally supplied by Myanmar.

Increased heroin flows to Africa, which could re-emerge as a trafficking route to Europe, or lead to more drug consumption on that continent.

Seaports in Pakistan and Iran have been seizing greater amounts of both exported heroin and imported chemicals needed by Afghan drug manufacturers to produce heroin. 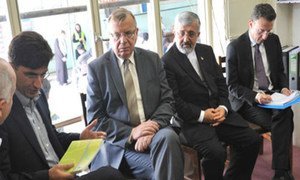 The head of the United Nations Office on Drugs and Crime (UNODC) met today with Iranian President Mahmoud Ahmadinejad to discuss how to increase cooperation between the agency and the country in the global fight against the production and trade of illicit drugs.