28 July 2011
The United Nations Human Rights Committee has issued a commentary on freedom of expression that says anti-blasphemy laws and restrictions on criticism of governments are incompatible with existing norms and that free expression is essential for the protection of human rights, the Office of the High Commissioner for Human Rights (OHCHR) reported today.

The committee also said counter-terrorism measures, including laws that outlaw acts that allegedly “encourage” or “justify” terrorism, “should be clearly defined to ensure that they do not lead to an unnecessary or disproportionate interference with freedom of expression;” and laws against defamation of public officials and heads of State “should not provide for more severe penalties solely on the basis of the identity of the person that may have been impugned.”

The committee’s report, entitled General Comment, is an interpretation of the 1966 International Covenant on Civil and Political Rights (ICCPR) which has 167 States parties. The UN Human Rights Committee is an independent body tasked with supervising compliance with the ICCPR.

“Prohibitions of displays of lack of respect for a religion or other belief system, including blasphemy laws, are incompatible with the covenant,” except in specific circumstances, it said, and States “should not prohibit criticism of institutions, such as the army or the administration.”

The committee said that so-called “memory laws,” which it defined as “laws that penalize the expression of opinions about historical facts,” are also “ incompatible with the obligations that the covenant imposes on States parties in relation to the respect for freedom of opinion and expression.”

“General Comment is a comprehensive response to numerous requests from lawmakers, judges, prosecutors, lawyers, rights defenders and even journalists asking for clarification on many of the issues covered by the rights to freedom of expression and opinion,” said committee member Michael O’Flaherty, the principal drafter of the report.

“It is a strong reaffirmation of the central importance for all human rights of the freedom of expression and sets out the very strict parameters within which the right can be restricted by States.”

“Freedom of expression is a necessary condition for the realization of the principles of transparency and accountability that are, in turn, essential for the promotion and protection of human rights,” the report said.

“States parties should put in place effective measures to protect against attacks aimed at silencing those exercising their right to freedom of expression.” 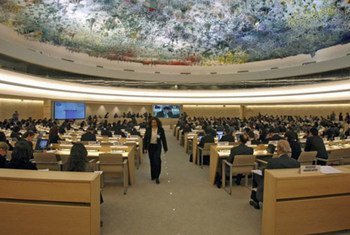 27 July 2011
The United Nations Human Rights Committee today accused Belarus of violating its international agreements by executing two persons while their cases were still under review by the committee.