Over 13,000 Gaza children participated in the kite flying championship
28 July 2011

Defying intimidation, children in Gaza stood their ground to wrestle the world record for kite flying back from China, hours after their United Nations-run summer camp facility was attacked by unknown assailants.

According to the UN Relief and Works Agency for Palestine Refugees in the Near East (UNRWA), 10 men attacked and vandalized the facility in north-west Gaza early today. The attackers damaged a large billboard, burned a UN flag and torched part of the stage.

In the kite-flying event, the official tally of children flying flags was more than 13,000. The verified figure will be released tomorrow. But the result beats the previous record of 10,465, which had been claimed in April by the Kite Association of Weifang Binhai Economic Technological Development Area in Weifang City, Shandong Province, China.

“Taking on the might of China is a daunting feat for the children of Gaza,” said UNRWA acting director in Gaza, Christer Nordahl. “But they have risen brilliantly to the challenge as they have done three times already this year.”

The new kite-flying feat by the Gaza youngsters follows their breaking of three world records in the past several weeks – the highest number flying parachutes from the ground, the largest number of people dribbling footballs and creating the largest ever hand painting.

“We brought happiness to our country by breaking the world record,” said 13-year-old Nadia el-Haddad. “Today because we broke the world record I feel like I have rights and that I’m like everyone else in the world.”

Eleven-year-old Abdullah Musleh said: “I’m happy when I’m flying the kites. We are the best!” Rawia Abd el-Dain, also aged 11, added: “I made my kite the Palestinian flag and when I fly it I feel like I’m raising my country and my flag up, up in the sky.”

This is the fifth year that UNRWA has organized the Summer Games – which include sports, arts and other activities – to provide a recreational outlet for an estimated 250,000 children in Gaza. This year’s Games coincide with the fifth year of the Israeli blockade of Gaza.

Meanwhile, none of the UN security personnel at the summer camp was hurt during the raid.

“We condemn this attack, which is an attack on the children of Gaza as much as on the United Nations,” UNRWA spokesperson Chris Gunness said in a statement.

“We call on the authorities in Gaza to investigate and bring those responsible to account. We will repair and rebuild the damaged infrastructure and go ahead with the event as planned today.” 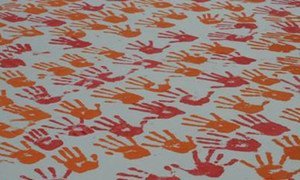 After breaking the world record for the number of people dribbling soccer balls last week, children at the United Nations-organized summer games in Gaza today set another record by creating the largest ever hand painting, a 5,620-square metre mosaic of handprints on canvas.