Secretary-General Ban Ki-moon and the Security Council strongly condemned today’s attack against a convoy of vehicles carrying members of the United Nations peacekeeping force in southern Lebanon in which five soldiers were wounded.

Mr. Ban was “deeply disturbed” by the attack targeting the UN Interim Force in Lebanon (UNIFIL) near Saida, also known as Sidon, 55 kilometres north of the peacekeepers base at Naqoura, according to a statement issued by his spokesperson. The blast occurred outside UNIFIL’s area of operations.

“The members of the Security Council condemned all attempts to threaten the security and stability of Lebanon and reaffirmed their determination to ensure that no such acts of intimidation will prevent UNIFIL from implementing its mandate in accordance with Security Council resolution 1701 (2006),” the Council said in a press statement read by Ambassador Peter Wittig of Germany, which holds the rotating presidency of the Security Council this month.

The Council expressed its sympathy to those injured and their families, and welcomed Lebanon’s commitment to launch an investigation and to bring perpetrators of the attack to justice. It also recognized the cooperation between the Lebanese Armed Forces and UNIFIL.

The statement issued by the spokesperson of the Secretary-General also stated that UNIFIL and Lebanese authorities were cooperating and coordinating closely to determine the circumstances surrounding the blast. “The Secretary-General hopes that the perpetrators are swiftly identified and brought to justice,” the statement added.

Members of the Council urged all parties to abide “scrupulously” by their obligation to respect the safety of UNIFIL and other UN personnel and to ensure that their freedom of movement is fully respected, in conformity with the peacekeeping force’s mandate and rules of engagement.

“In this regard, the members of Security Council reaffirmed their full support to UNIFIL and expressed their strong appreciation to Member States contributing troops,” said the statement.

Today’s attack was the second against UNIFIL in as many months. On 27 May, a roadside bomb ripped through a UNIFIL convoy near Sidon injuring six Italian peacekeepers and two Lebanese civilians.

UNIFIL has been deployed to the area since 1978. Last August the Security Council extended its mandate for a year, until 31 August 2011. 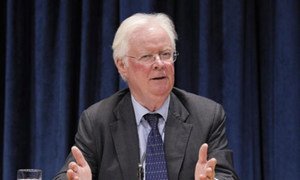 The United Nations Special Coordinator for Lebanon today told the Security Council that the resolution that ended the 2006 war between Israel and Hizbollah has largely been respected over the past five year, but there has been little progress towards an envisaged permanent ceasefire.