UNHCR
These displaced Somali women head back to their families carrying aid distributed in Mogadishu.
26 July 2011

Up to 100,000 internally displaced people have arrived in the Somali capital, Mogadishu, over the last two months in search of food, water, shelter and other vital humanitarian assistance after fleeing famine-hit areas, the United Nations refugee agency reported today.

“The number is growing by the day, with daily arrivals averaging 1,000 in July,” Vivian Tan, spokesperson for the UN High Commissioner for Refugees (UNHCR), told reporters in Geneva.

Severe drought has plunged communities in the southern region of Somalia into famine and sent thousands fleeing both to Mogadishu and to neighbouring Ethiopia and Kenya. The UN and partner aid agencies are seeking approximately $1.6 billion in aid to assist millions affected by the crisis in Somalia and the wider Horn of Africa region.

On Monday, the top UNHCR officials in Somalia visited the Badbado settlement in Mogadishu which is currently home to an estimated 28,000 people.

“Given the growing numbers of displaced people in search of food assistance, the amounts being delivered are not sufficient to meet all of the needs. This has caused serious crowd crushes and even some looting,” said Ms. Tan.

“As a result, some of the weakest and most vulnerable are left with nothing, despite the best efforts of agencies and charities,” she added.

The UN World Food Programme (WFP) is hoping that the first in a series of airlifts to Somalia will begin today. The planes will bring, among other supplies, ready-to-use therapeutic food destined specifically for severely malnourished children, agency spokesperson Emilia Casella said in Geneva.

To enable people to carry the food and water they are able to obtain, UNHCR said it will begin distributing 4,000 assistance packages for 24,000 people in the coming week, including jerry cans, buckets, pots, plates, bowls, cups and other utensils. The agency has already distributed shelter materials, including plastic sheeting, in Badbado.

So far this year, UNHCR has distributed over 17,000 emergency assistance packages benefiting 102,000 people in south-central Somalia. It will distribute a further 19,000 packages in the coming days, containing essential items such as plastic sheeting for shelter, sleeping mats and blankets, buckets and jerry cans for water, kitchen sets, utensils, plates and cups for food to 114,000 people.

Another 40,000 packages containing high-energy biscuits, oral re-hydration solution and water purification tablets, are being procured by UNHCR and will reach an estimated 240,000 people in the coming days.

In neighbouring Kenya, UNHCR began an operation yesterday to relocate Somali refugees currently living on the outskirts of the Dadaab refugee camps to a new site known as the Ifo Extension. Over 500 five-person family tents were erected, with a capacity to accommodate at least 2,500 people. A second site, known as Kambioos, will also open in the next few days, to help decongest the outskirts of Dagahaley refugee camp.

The Dadaab camps – whose population has swelled to nearly 380,000 in recent months – have been receiving an average of 1,300 new refugees daily, fleeing conflict, drought, famine and insecurity in Somalia. UNHCR said the Somali refugees are arriving in an “appalling” state of health, dehydrated and severely malnourished, especially children.

Meanwhile, the agency stated that the overall nutrition situation in the remote Dollo Ado camps in Ethiopia remains a concern, with malnutrition levels among the new arrivals still high. One in three children under five arriving from Somalia is severely malnourished.

UNHCR and its partners are responding to address the situation, with supplementary feeding at the transit centre for children under five and hot meals for all refugees waiting to be registered and transferred to the refugee camps.

As of Friday, there were 114,646 Somalis in the Dollo Ado area camps, UNHCR said. The total number of Somali refugees in Ethiopia is currently over 156,000.

The UN Children’s Fund (UNICEF) has launched, along with the Kenyan Ministry of Health and the World Health Organization (WHO), a vaccination campaign targeting over 200,000 children living in drought-affected host communities around the Dadaab refugee settlement.

Polio vaccinations and distributions of vitamin A and de-worming tablets are also being integrated into this campaign, UNICEF spokesperson Marixie Mercado stated.

She added that in southern Somalia, where immunization coverage is very low, an integrated measles, tetanus toxoid, vitamin A and de-worming campaign to reach 86,000 women and children in Mogadishu was wrapping up today.

Following that, the plan is to reach 2.5 million children up to the age of 5 in Gedo, provided UNICEF is given access across the south, said Ms. Mercado. The immunization campaigns are part of a regional push to protect children from becoming more vulnerable to potentially fatal diseases due to malnutrition. 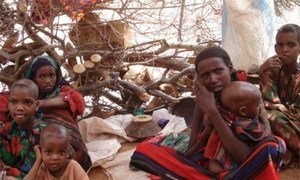 Secretary-General Ban Ki-moon today made an impassioned plea to the international community to mobilize resources to avert a humanitarian catastrophe in Somalia, where severe drought has plunged communities in the southern region of the country into famine.