The drought in Somalia has displaced thousands of families

21 July 2011
For many months United Nations aid agencies have warned of an impending crisis in the Horn of Africa as drought, failed harvests and fighting in some areas led to increasing food insecurity. Now conditions are so grim that the UN has turned to a word it uses sparingly and specifically – famine.

While many countries worldwide face food security crises, with large numbers of people hungry and unable to find enough food, only rarely do the conditions meet the humanitarian community’s formal criteria for a famine. The last time it was used in Somalia, for example, was in 1991-92, despite several periods of protracted drought and other problems in the intervening years.

Other factors considered in these areas of Somalia include large-scale displacement, widespread destitution, disease outbreaks and social collapse.

The definition has been developed through the work of the Integrated Food Security Phase Classification (IPC), which includes specialists from humanitarian agencies, including the UN Food and Agriculture Organization (FAO) and the UN World Food Programme (WFP), as well as leading non-governmental organizations (NGOs) and Government aid agencies.

The gathering of data to determine whether the criteria are met is in this case in the hands of the UN-backed Food Security and Nutrition Analysis Unit-Somalia (FSNAU), which is administered by FAO. FSNAU then passes the information to the UN, aid agencies and the United States Famine Early Warning Systems Network (FEWS NET).

The declaration of a famine carries no binding obligations on the UN or Member States, but serves to focus global attention on the problem.

Horn of Africa: UN steps up efforts to bring urgent relief to millions in need

In wake of attack in Guinea, UN envoy presses for dialogue 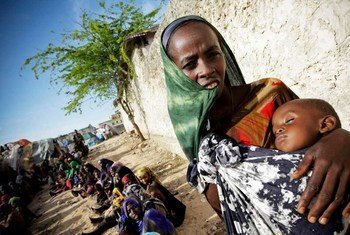 20 July 2011
The United Nations today declared a famine in two regions of southern Somalia owing to the worst drought in decades, and appealed for urgent resources to assist millions of people in desperate need of help.