The United Nations today declared a famine in two regions of southern Somalia owing to the worst drought in decades, and appealed for urgent resources to assist millions of people in desperate need of help.

“Every day of delay in assistance is literally a matter of life or death for children and their families in the famine-affected areas,” said Mark Bowden, the UN Humanitarian Coordinator for Somalia.

It is the first time since 1991-92 that the UN has declared famine in a part of Somalia.

Famine is declared when acute malnutrition rates among children exceed 30 per cent, more than two people per every 10,000 die per day, and people are not able to access food and other basic necessities, according to the UN Office for the Coordination of Humanitarian Affairs (OCHA).

Mr. Bowden warned that malnutrition rates in Somalia are currently the highest in the world, with peaks of 50 per cent in certain areas of the country’s south.

In the two regions of southern Bakool and Lower Shabelle, acute malnutrition rates are above 30 per cent, with deaths among children under the age of five exceeding six per 10,000 per day in some areas. In the last few months, tens of thousands of Somalis have died as a result of causes related to malnutrition, the majority of them children.

Consecutive droughts have affected the country in the last few years while the ongoing conflict has made it extremely difficult for agencies to operate and access communities in the south. Nearly half of the Somali population – 3.7 million people – are now estimated to be in crisis, with an estimated 2.8 million of them in the south.

Speaking to reporters in New York, Secretary-General Ban Ki-moon stressed that humanitarian agencies need urgent funding to save lives, adding that roughly $300 million is needed in the next two months to provide an adequate response to famine-affected areas.

“We need donor support to address current needs and prevent a further deterioration of the crisis,” he said, after addressing the Security Council on the impact of climate change on international peace and security. “If funding is not made available for humanitarian interventions now, the famine is likely to continue and spread.”

Mr. Bowden said that, without immediate action, the famine will spread to all eight regions of southern Somalia within two months, due to poor harvests and infectious disease outbreaks.

“We still do not have all the resources for food, clean water, shelter and health services to save the lives of hundreds of thousands of Somalis in desperate need,” he added.

While UN humanitarian agencies have welcomed the recent statement by the insurgent group Al-Shabaab requesting international assistance in southern Somalia, the inability of food agencies to work in the region since early 2010 has prevented the UN from reaching the very hungry – especially children – and has contributed to the current crisis.

“We call on all parties, from the donor community to the local authorities in Somalia, to lift restrictions on humanitarian grounds,” OCHA said. “The humanitarian community is doing its best to address the food crisis, but much more could be done if the current restrictions to the delivery of aid are lifted and unrestricted cross-border passage of relief aid is granted.”

Despite challenges, humanitarian agencies have scaled up efforts in recent weeks. To expedite the delivery of supplies into the worst-affected areas, the UN has started airlifting urgently needed medical, nutrition and water supplies.

The Executive Director of the UN World Food Programme (WFP), Josette Sheeran, said today that her agency is considering a number of options to ensure that food aid reaches the most vulnerable, including airlifting high-energy biscuits and highly nutritious supplementary foods – for vulnerable children and pregnant or nursing mothers – into strategic locations in the south, where they would be distributed by local organizations.

Plans to mobilize supplementary food products for children in response to the broader Horn of Africa drought crisis could make this the biggest ever operation to deliver these products that are highly effective in treating malnutrition in the first 1,000 days of life, the agency added.

“Operations in Somalia are among the highest risk in the world, and WFP has lost 14 relief workers there since 2008,” Ms. Sheeran noted. “We will aggressively pursue efforts to mitigate against risk, through robust assessments and monitoring, but I am calling on all sides to stand together in recognising the inevitable risks that will be present in southern Somalia.”

Ms. Sheeran, who is in Ethiopia holding high-level meetings with Government officials and the African Union (AU), will travel to Somalia and Kenya in the coming days to visit drought-affected areas, review WFP operations, and speak to victims of the drought.

Joining her on the visit to Kenya will be Jacques Diouf, the Director-General of the UN Food and Agriculture Organization (FAO), which will convene an emergency meeting in Rome on Monday to address the escalating crisis in the Horn of Africa and mobilize international support.

“Hundreds of people are dying every day and if we do not act now many more will perish,” said Mr. Diouf. “We must avert a human tragedy of vast proportions.

“As much as food assistance is needed now, we also have to scale up investments in sustainable immediate and medium-term interventions that help farmers and their families to protect their assets and continue to produce food,” he added.

UN agencies have asked for $1.6 billion to pay for essential programmes in the Horn of Africa, but have only received half that amount. Kenya, Somalia, Ethiopia and Djibouti are all facing a crisis that is being called the worst in 50 years, leaving an estimated 11 million people in need of humanitarian assistance. 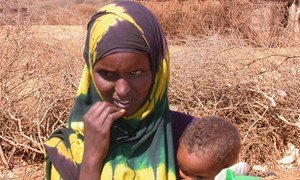 The United Nations Children’s Fund (UNICEF) said today it had airlifted emergency nutrition supplies and water equipment into Somalia, the country worst affected by a severe drought that has ravaged large swaths of the Horn of Africa, leaving an estimated 11 million people in need of humanitarian assistance.