Thousands of people displaced by conflict in Kordofan State have sought refuge in an area secured by UNMIS.
15 July 2011

United Nations officials and the Security Council today called for a halt to the fighting in the Sudanese state of Southern Kordofan amid reports of aerial bombings of civilians and mass graves, and called on Khartoum to provide unhindered access for humanitarian assessment and assistance.

Members of the Council “urge all parties to respect humanitarian principles and to allow humanitarian personnel timely and unfettered access to the affected civilian population,” Ambassador Peter Wittig of Germany, which holds the Council’s rotating presidency this month, told reporters at UN Headquarters.

His comments followed a closed-door meeting of the Council with Valerie Amos, Under-Secretary-General for Humanitarian Affairs, who briefed the 15-member body on the situation in Southern Kordofan, where fighting continues despite an agreement signed last month between the parties.

“I am increasingly alarmed by the mounting allegations of mass graves in South Kordofan, Sudan, and of reported disappearances of civilians, targeting of people on an ethnic basis, and extra-judicial killings,” Ms. Amos said in a statement released after the meeting.

She said the Government of Sudan has repeatedly denied the UN access to the area since the skirmishes between its forces and those of the Sudan People’s Liberation Movement (SPLM-North) began in early June.

Mr. Šimonovic said the loss of a mandate in the area was a “dangerous monitoring gap.”

He added that the Office of the High Commissioner for Human Rights (OHCHR) will soon send an assessment mission to the area. “We do hope that they would be allowed by the government to access Kordofan,” he said.

During his recent stop in Khartoum, on his way to South Sudan’s independence ceremony, Secretary-General Ban Ki-moon had urged the Sudanese Government to put in place mechanisms to ensure that humanitarian operations can continue in Southern Kordofan and Blue Nile states, and added that UN personnel needed unfettered access, according to spokesperson Martin Nesirky.

“He said that he was extremely concerned about the violence in Southern Kordofan and its impact on civilians, that there was a need for a ceasefire as matter of priority and that, we simply could not afford with the mandate at that point about to run out, and now having run out, we simply could not afford to have any gap in monitoring at this critical juncture,” Mr. Nesirky said.

In his remarks to the press, Mr. Wittig said Council members also called on Sudanese Government and the SPLM-North “to agree to an immediate cessation of hostilities, viable security arrangements and the modalities for their implementation.”

They also condemned “in the strongest terms” any violent or unlawful acts against civilians and UN personnel, and stressed that those responsible for the violation of international human rights and humanitarian law should be held accountable, he said. 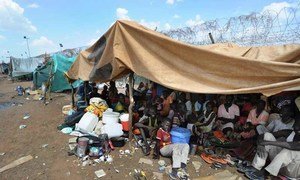 Secretary-General Ban Ki-moon has voiced his disappointment over the continued fighting in Sudan’s South Kordofan state and called on the parties to agree to a cessation of hostilities.