15 July 2011
An independent United Nations human rights expert today called on South Africa to build a food economy that is inclusive and benefits all segments of the population, especially the millions who are poor and food insecure.

An independent United Nations human rights expert today called on South Africa to build a food economy that is inclusive and benefits all segments of the population, especially the millions who are poor and food insecure.

“South Africa is a champion of institutionalizing social, economic and cultural rights such as the human right to food, but it has yet to prove it can deliver results for 12 million poor food insecure people, 70 per cent of which live in rural areas,” Olivier De Schutter, the UN Special Rapporteur on the right to food, said in Pretoria at the end of his official visit.

He praised South Africa for integrating the right to food in its Constitution. “But it is now time to build a food economy that benefits the majority of the population,” he said.

“We must create an inclusive food system for South Africa.”

A reorientation of agricultural support programmes, he said, would start with the recognition that South Africa is confronted with “a strongly dualized agricultural sector,” and that the current organization of markets has been inherited from the apartheid era.

“In contrast to the large white commercial farmers, the newly established black farmers are small-scale farmers, with a poor access to markets, a lack of marketing skills, and a weaker bargaining position in the food chains,” he said.

“If South Africa is to meet its target of creating 500,000 jobs in the agri-food sector, there is no alternative than to enable a large proportion of the 1.5 million subsistence households to graduate into small-scale farmers.”

“South Africa needs to create food systems that work for the poor and not only sell to the poor,” he said. “Local food systems that promote fresh and nutritious food can be set up by a new set of policies. For instance, public procurement schemes can be made to work for rural development by allowing for preferential treatment in favour of small-scale farmers.”

Mr. De Schutter said South Africa had “many well-intentioned policies” that put food security at the top of the Government’s agenda, “but the results still are below expectations.”

The Special Rapporteur is an independent, non-paid expert who reports to the UN Human Rights Council in Geneva. 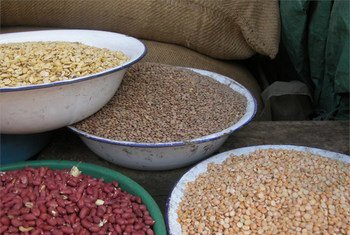 6 July 2011
Secretary-General Ban Ki-moon today underlined the importance of promoting food security, saying that ensuring everyone has enough to eat has a positive spill-over effect on health, education and the empowerment of women, key catalysts for progress towards internationally agreed poverty eradication targets.