14 July 2011
The General Assembly today admitted the Republic of South Sudan as the 193rd member of the United Nations, welcoming the newly independent country to the community of nations.

South Sudan’s independence from the rest of Sudan is the result of the January 2011 referendum held under the terms of the 2005 Comprehensive Peace Agreement (CPA) that ended the decades-long civil war between the North and the South.

“At this moment… in this place… the world gathers to say in one voice: Welcome, South Sudan. Welcome to the community of nations,” Secretary-General Ban Ki-moon said after the Assembly adopted a resolution, by acclamation, to admit Africa’s newest country.

Mr. Ban, who was among the UN dignitaries who attended the independence ceremony in South Sudan’s capital, Juba, last Saturday, pledged the world body’s assistance as the country shapes its future. “The commitment of all Member States will be essential as South Sudan moves forward,” he stated.

“Together, let us say to the citizens of our newest Member State: You now sit with us. We stand with you.”

“Today we are firmly entrenching South Sudan in the community of nations in the same way as other Member States with the same rights and responsibilities. The universality of the United Nations and the values that are enshrined in its Charter are thereby enhanced,” he stated.

“I am confident that South Sudan will contribute to promote the objectives of security, peace, prosperity, friendship and cooperation between peoples as they are promoted by the United Nations, and this for the good of the people of South Sudan, for the good of the region and for the entire African continent.”

Speaking on behalf of South Sudan, Vice President Riek Machar said he was “honoured and humbled” to stand before Member States to convey the gratitude of his Government and people to the Assembly for admitting the new nation to membership in the UN.

He paid tribute to all those who participated in the long struggle for South Sudan’s liberation. “That struggle cost our people millions of lives and untold suffering. Their sacrifices will not be forgotten.”

Mr. Machar also pledged that his country will work to foster peace in its region, while building a strong and viable nation at home.

“When we started our journey we could hardly imagine that the road would lead us to this point, however much we may have hoped for it. Now, we must move forward together to fulfil our people’s aspirations.”

As South Sudan’s flag was hoisted at UN Headquarters, Mr. Ban pledged that the world body will work with the country to realize all the hopes and dreams the flag represents. “Like your flag, let us rise. Let us rise, together, to the challenge.”

The latest country to join the world body had until now been Montenegro, which became the 192nd UN Member State on 28 June 2006, just weeks after it gained its independence from Serbia. 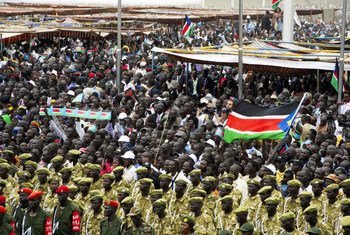 13 July 2011
The Security Council today recommended to the General Assembly that the Republic of South Sudan be admitted to membership in the United Nations, bringing the new nation one step closer to becoming the world body’s 193rd member.