The Security Council today recommended to the General Assembly that the Republic of South Sudan be admitted to membership in the United Nations, bringing the new nation one step closer to becoming the world body’s 193rd member.

The Security Council today recommended to the General Assembly that the Republic of South Sudan be admitted to membership in the United Nations, bringing the new nation one step closer to becoming the world body’s 193rd member.

The Council’s decision was contained in a resolution that it adopted without a vote, on the recommendation of its Committee on the Admission of New Members, which reviewed the application for membership submitted by the President of South Sudan.

In a statement read out by Guido Westerwelle, Foreign Minister of Germany, which holds the Council’s rotating presidency this month, the 15-member body noted “with great satisfaction” South Sudan’s solemn commitment to uphold the purposes and principles of the UN Charter and to fulfil all the obligations contained therein.

“We look forward to the Republic of South Sudan joining us as a member of the United Nations and to working closely with its representatives,” the statement added.

Secretary-General Ban Ki-moon addressed the meeting, saying that “like any newborn,” South Sudan – which on the day of its birth ranked at the bottom of almost all human development indicators – needs help.

“Our responsibilities are enormous and the role of the UN is vital, but it is complicated,” he said. “We must continue to help – to help the new nation become a nation – to help the region consolidate the gains. This is the ultimate test of peacebuilding and of nation-building.”

It will now be for the Assembly to act on the Council’s recommendation, which comes just days after South Sudan officially broke away from the rest of Sudan on 9 July.

South Sudan’s independence is the result of the January 2011 referendum held under the terms of the 2005 Comprehensive Peace Agreement (CPA) that ended the decades-long civil war between the North and the South.

In a separate meeting today, the Council heard a briefing from its peacekeeping chief regarding the new UN Mission in the Republic of South Sudan (UNMISS), which was set up last week to help the new nation consolidate peace and lay the foundation for longer-term state-building, conflict prevention and economic development.

The new mission, comprising up to 7,000 military personnel and up to 900 civilian police personnel as well as a civilian component, takes over from the UN Mission in Sudan (UNMIS), which was created following the signing of the CPA.

“The transition towards this new mission is well under way,” said Alain Le Roy, the Under-Secretary-General for Peacekeeping Operations, noting that the Special Representative of the Secretary-General, Hilde Johnson, has been working with an initial team to establish the mission since she took up her post as head of UNMISS on 9 July. Efforts are being aimed at completing the transition within six months.

Meanwhile, efforts are also under way to expedite the complete deployment of the UN Interim Security Force for Abyei (UNISFA), with plans for initial deployment of 1,643 soldiers before 20 July, said Mr. Le Roy.

According to an agreement signed between the north and the south last month, their respective forces – which have clashed repeatedly in the disputed region – are to withdraw from Abyei at the end of this first deployment.

“One of the initial tasks of UNISFA will be to monitor this complete withdrawal of forces from all of Abyei,” he stated.

Mr. Le Roy also voiced deep concern at the situation in the Sudanese state of Southern Kordofan, where reports of continued fighting are putting the lives of civilians at risk. He stressed that it is critical that the parties cease hostilities and move towards political dialogue.

“It is also important that the parties work to resolve the unfinished processes of the Comprehensive Peace Agreement and post-independence issues, including the final status of Abyei, popular consultations in Southern Kordofan and Blue Nile states, oil revenue sharing, financial transitional arrangements and border security and demarcation,” he stated.

“Rapid, peaceful resolution of these issues will play a key role in ensuring long-term stability in both countries and the region.” 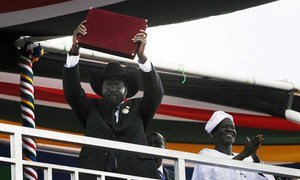 The process aimed at attaining United Nations membership got under way today for the Republic of South Sudan as the President of the Security Council referred the application of the world’s newest country to the body tasked with examining such requests.