The renewable energy sector has continued to perform well despite the global economic slowdown, cuts in incentives, and low natural-gas prices, according to a United Nations-backed report unveiled today, which shows that the sector supplied an estimated 16 per cent of global energy last year.

The sector also delivered close to 20 per cent of the world’s electricity production, according to the report commissioned by the Renewable Energy Policy Network for the 21st Century (REN21), whose secretariat is supported by the UN Environment Programme (UNEP).

Global solar power generation doubled last year compared to the previous year, thanks to government incentive programmes and the continued fall in the price of Photovoltaic (PV) solar panels, according to the “Renewables 21: Global Status Report.”

Germany installed more PV in 2010 than the entire world added in 2009. PV markets in Japan and the United States almost doubled relative to 2009.

Globally, wind power added the most new capacity, followed by hydropower and solar PV, but for the first time ever, Europe added more PV than wind capacity.

Renewable energy policies continue to be the main driver of the renewable energy growth, according to the report. By early this year, at least 119 countries had some type of policy target or renewable support policy at the national level, more than doubling from 55 countries in early 2005. More than half of those countries are in the developing world.

Funds invested in renewable energy companies, and in utility-scale generation and biofuel projects increased to $143 billion, with developing countries surpassing developed economies for the first time.

“More and more of the world’s people are gaining access to energy services through renewables, not only to meet their basic needs, but also to enable them to develop economically,” he added.

♦ Receive daily updates directly in your inbox - Subscribe here to a topic.
♦ Download the UN News app for your iOS or Android devices.
renewable energy 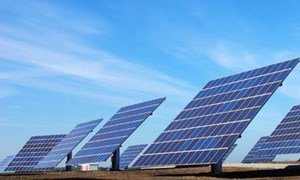