The United Nations today welcomed the results of studies that show that taking a tablet of an antiretroviral drug daily can reduce the risk of acquiring HIV by up to 73 per cent in people not infected by the virus that causes AIDS.

The findings of the studies carried out in Kenya, Uganda and Botswana, showed that daily use of both tenofovir and tenofovir/emtricitabine antiretrovirals, taken as preventive pre-exposure prophylaxis (PrEP) medicines, can prevent heterosexual transmission of HIV from men to women and from women to men.

“This is a major scientific breakthrough which re-confirms the essential role that antiretroviral medicine has to play in the AIDS response,” said Michel Sidibé, the Executive Director of the

Joint UN Programme on HIV/AIDS (UNAIDS). “These studies could help us to reach the tipping point in the HIV epidemic,” he added.

One of the studies, conducted by the University of Washington’s International Clinical Research Center and dubbed Partners PrEP, followed 4,758 sero-discordant couples – in which one person had HIV infection and the other did not – in Kenya and Uganda.

The second study, termed TDF2 trial, conducted by the United States Centers for Disease Control, followed 1,200 men and women in Botswana who received either a once-daily tenofovir/emtricitabine tablet or a placebo pill. The antiretroviral tablet reduced the risk of acquiring HIV infection by roughly 63 per cent overall in the study population of uninfected heterosexual men and women.

The drugs used are available in their generic forms in many countries at prices as low as $0.25 per tablet.

In November last year, a trial among men who have sex with men in six countries reported a 44 per cent reduction in HIV transmission among those who took a daily tenofovir/emtricitabine tablet.

“Effective new HIV prevention tools are urgently needed, and these studies could have enormous impact in preventing heterosexual transmission,” Margaret Chan, the Director-General of the World Health Organization (WHO), said. “WHO will be working with countries to use the new findings to protect more men and women from HIV infection,” she said.

UNAIDS and WHO have already been working with countries in sub-Saharan Africa, Latin America and Asia to explore the potential role of pre-exposure prophylaxis in HIV prevention.

It is currently estimated that only about half of the 33 million people living with HIV know their status. An increase in testing for HIV would have a significant impact on the AIDS response, particularly if more people gain access to new HIV prevention technologies in light of the new findings, the two UN agencies said.

UNAIDS and WHO recommended that individuals and couples make “evidence-informed decisions” on which combination of HIV prevention options is best for them, stressing that the no single method is fully protective against HIV infection.

Antiretroviral drugs for prevention need to be combined with other HIV prevention options, including correct and consistent use of male and female condoms, waiting longer before having sex for the first time, having fewer partners, medical male circumcision and avoiding penetrative sex, they added. 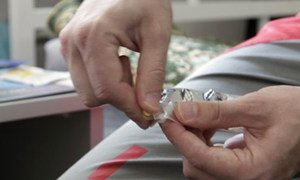