The Joint UN Programme on HIV/AIDS (UNAIDS) said the agreement marks the first time a pharmaceutical company has signed an agreement with the Medicines Patent Pool, describing it as a turning point for future private sector collaboration in sharing innovation to advance the global response to HIV.

The Medicines Patent Pool negotiates with patent holders to share their intellectual property with the Pool, then licensing it to other producers to facilitate the production of affordable generic medicines well-adapted for use in poorer countries.

Companies interested in producing generic versions of the medicines for developing countries will be able to approach the Patent Pool to negotiate licensing terms.

“This agreement between the Medicines Patent Pool and Gilead signals a new era in the response to HIV with private and public sectors working hand in hand for the best interests of public health,” said Michel Sidibé, the Executive Director of UNAIDS.

“I hope today’s announcement will inspire other pharmaceutical companies to follow suit to share intellectual property and innovation to make new technological advances in HIV treatment available sooner to the people that need them most,” he added.

The agreement is especially significant because tenofovir is one of the first-line medicines for HIV/AIDS recommended for use by the UN World Health Organization (WHO), according to guidelines released last year. Under the new agreement, tenofovir will also be licensed for use to treat Hepatitis B, a common and serious co-infection of HIV. 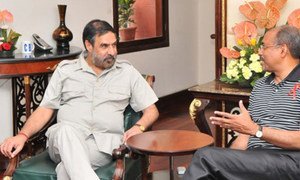 The head of the United Nations agency concerned with the fight against HIV/AIDS today welcomed the announcement that India would continue to make generic drugs to combat the disease and said the decision will save millions of lives.