“Our priority is to stop the suffering now,” Mr. Ban told reporters at UN Headquarters, where earlier today he convened an emergency meeting with the heads of a number of agencies working in the region.

“We agreed we must do everything we can to prevent this crisis deepening,” he said. “The human cost of this crisis is catastrophic.”

UN agencies have asked for $1.6 billion to pay for essential programmes in the Horn of Africa, but have only received half that amount. Kenya, Somalia, Ethiopia and Djibouti are all facing a crisis that is being called the worst in 50 years.

“We cannot afford to wait,” stressed the Secretary-General, who said he will personally get in touch with countries and ask them to provide the necessary resources.

Among the agencies participating in today’s meeting were the UN High Commissioner for Refugees (UNHCR), the World Food Programme (WFP), the UN Children’s Fund (UNICEF), the UN Development Programme (UNDP) and the Office for the Coordination of Humanitarian Affairs (OCHA).

Valerie Amos, Under Secretary-General for Humanitarian Affairs and head of OCHA, just returned from a trip to the region, where she visited a health centre in Ethiopia.

“The thing that I was most affected by was the women who had walked for five hours that day to get to that health centre. They had brought the children that were strong enough to accompany them. My big worry is the children they have left at home who are extremely vulnerable.

“So it’s serious – the gravity of this cannot be underestimated,” she said. “This crisis is not going to end anytime soon so we have to recognize that the numbers will increase and we will have to scale up our efforts considerably.”

She added that while people need food and nutritional help, those affected by the crisis need clean water, sanitation, health care, livelihoods support, protection and shelter.

The Executive Director of WFP, Josette Sheeran, said her agency is urgently scaling up scaling up the delivery of highly fortified, supplementary food products, especially targeting the first 1,000 days of life.

“Protecting the brains and bodies of young children, and pregnant and lactating women through special nutritional food is our top priority,” she said in a statement.

In addition to support for the wider appeal, Ms. Sheeran stressed the need for continued support for long-term initiatives that will help communities in the Horn of Africa to break out of the vicious cycle of drought and disaster.

In Geneva, two UN human rights experts appealed to the global community to take “concerted and urgent” measures to assist the millions who are suffering in the region, warning of large-scale starvation if international intervention is not forthcoming.

Shamsul Bari, the Independent Expert on the situation of human rights in Somalia, noted that drastically increasing food prices and continuing conflict and insecurity have caused a huge displacement of the population, with thousands of Somalis fleeing to Ethiopia, Kenya, and Djibouti every day.

Mr. Bari, who last week visited Somalia and Kenya, said the situation was markedly worse than in March, when he had expressed concerns over the slow response of the humanitarian community to the situation.

For his part, the UN Special Rapporteur on the right to food, Olivier De Schutter, said the international community should be prepared for more such droughts.

“This crisis looks like a natural calamity, but it is in part manufactured,” Mr. De Schutter said, adding that climate change will result in such events being more frequent. He called for, among other measures, emergency food reserves in strategic positions, and better preparedness for drought, for which Governments must be held to account.

“With a rate of child malnutrition above 30 per cent in many regions of these countries, the failure of the international community to act would result in major violations of the right to food,” Mr. De Schutter said. “International law imposes on States in a position to help that they do so immediately, where lives are at stake.” 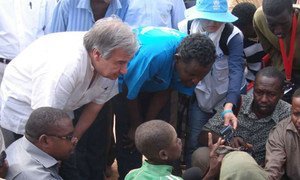 Having witnessed the dire humanitarian situation in Somalia first-hand, the head of the United Nations refugee agency has appealed for greater resources to provide assistance to people in the drought-stricken Horn of Africa country.