The United Nations human rights office today voiced concern about the apparent use of excessive force against protesters on the weekend by Malaysian police and possible retaliation against demonstrators who were arrested and released.

“We are very concerned by the recent crackdown on peaceful demonstrators by the Government in Malaysia, and particularly disappointed to see the apparent use of excessive force by the police against so many peaceful demonstrators in an established democracy like Malaysia,” said Rupert Colville, a spokesperson for the Office of the High Commissioner for Human Rights (OHCHR).

“As a Member of the Human Rights Council, Malaysia has pledged to uphold the highest standards in the promotion and protection of human rights,” he told reporters in Geneva.

According to media reports, Malaysian authorities used tear gas and water cannons against protesters in the capital, Kuala Lumpur, on Saturday, reportedly leading to one death, several injuries and the arrest of more than 1,600 people.

“While the police have said that all the 1,600 or more detained demonstrators have been released, we remain concerned about retaliation against these individuals, as well as against those who were arrested in the lead up to the demonstration, some of whom are reportedly still in detention,” said Mr. Colville. “These individuals should not be punished for exercising their fundamental human rights.”

OHCHR “remains particularly concerned about the detention of six individuals under the Emergency Ordinance and calls for their immediate release,” he said. The six political leaders were arrested in June and are still being held, according to media reports.

It is also “alarmed” at the targeting of individuals for championing the rights of Malaysian citizens to express their opinions and to peacefully assemble, he said.

Mr. Colville singled out threats against Ambiga Sreenevasan, a leader of the Coalition for Clean and Fair Elections, known locally as Bersih (“clean”).

“Inappropriate accusations of treason and racial and religious incitement by officials and other public figures, in the context of death threats that have already been made against the Bersih leader Ambiga Sreenevasan, are quite frankly shocking and not conducive to healthy political dialogue,” he said. 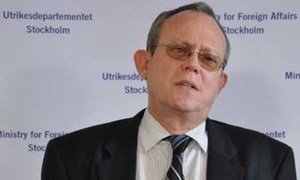 An independent United Nations human rights expert today said Malaysia’s “heavy-handed” control of a demonstration on Saturday risks democracy there, and expressed concern with reports of detention of political leaders.