The head of the United Nations agency concerned with the fight against HIV/AIDS today welcomed the announcement that India would continue to make generic drugs to combat the disease and said the decision will save millions of lives.

Michel Sidibé, the Executive Director of Joint UN Programme on HIV/AIDS (UNAIDS), said after a meeting in New Delhi with India’s Commerce Minister Anand Sharma, that “millions of people will die if India cannot produce generic antiretroviral drugs, and Africa will be the most affected.”

“The Government of India reaffirms its full commitment to ensure that quality generic medicines, including antiretroviral drugs, are seamlessly available, and to make them available to all countries,” Mr. Sharma said, according to a UNAIDS press statement.

The cost of the least expensive first-generation treatment regimen has dropped from several hundred dollars to less than $86 per patient per year with generic drugs, UNAIDS said.

Mr. Sidibé said “India, together with Brazil, South Africa, China and Russia, must forge an alliance with other high-income countries to ensure that no single person in the world dies because they could not afford to buy life-saving medicines or health care.” 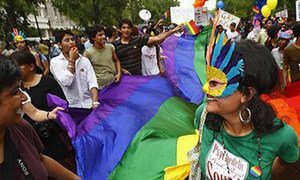 The United Nations agency spearheading the global response to HIV/AIDS today lauded India’s efforts to provide prevention and treatment services for men who have sex with men and transgender people, while stressing the need to scale up services and eliminate homophobia.