More than 400 ex-combatants from both sides of the long-running Darfur conflict will lay down their arms this week and take part in a disarmament and reintegration exercise backed by the United Nations-African Union peacekeeping force (UNAMID) in the Sudanese region.

Former soldiers with the Sudanese armed forces and former members of rebel movements will undergo security screenings, medical exams and psychological assessments as part of the disarmament exercise, which kicks off today in El Fasher, the capital of North Darfur state.

The participants will then attend workshops on reintegrating into civil society, receive job training and be given an allowance to help them re-establish themselves in the community, according to a press release issued by the mission.

UNAMID's DDR activities are particularly aimed at discouraging the use of child soldiers by all sides in the Darfur conflict, which has raged for seven years on Sudan's western flank.

More than 1,000 children have been released by armed groups in Darfur over the past two years and last month one of the rebel groups, the Abdul Wahid faction of the Sudan Liberation Army (SLA), issued a renewed command order banning the use and recruitment of child soldiers.

The Sudanese Government has also requested the help of UNAMID in training its soldiers on child protection. 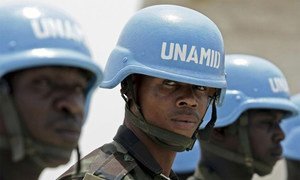 An Ethiopian peacekeeper serving with the joint United Nations-African Union mission in Darfur (UNAMID) has died after being shot while travelling in the west of the troubled Sudanese region, the mission reported today.