Sudan: UN condemns harassment of its peacekeepers in Southern Kordofan

The United Nations today strongly condemned the detention and abuse by the Sudanese armed forces of four UN peacekeepers who were on patrol in Kadugli, the main town in Southern Kordofan, where fighting is raging between the northern and southern armies.

The harassment of the peacekeepers was blamed on members of the northern army known as the Sudanese Armed Forces (SAF), UN spokesperson Martin Nesirky told reporters in New York.

“The Sudanese Armed Forces, the [southern] Sudan People’s Liberation Army [SPLA] and other armed groups must immediately stop intimidating and harassing UN staff, who are critical to provide the necessary humanitarian assistance to the vulnerable populations,” said Mr. Nesirky.

He said security and the humanitarian situation in Southern Kordofan remained of very serious concern amid intermittent fighting, shelling and military build-up in various areas of the state.

In the other disputed area of Abyei, the UN peacekeeping Mission in Sudan (UNMIS) confirmed that six shells fired by SAF earlier today landed 150 metres away from an UNMIS base in Agok. There is no report of casualties.

“We are in the process of verifying the details, as the SAF is claiming the shelling was part of an exercise, while the SPLA is stating that the SAF shelling was targeting SPLA positions and intimidating the local population around Agok. It remains to be determined precisely what happened,” said the UN spokesperson.

“Both sides must stop military actions, which are not only a threat to the UN in the area but to the local populations in the area,” he added.

Yesterday, a UNMIS team landing in Magennes – a contested area along the border of Upper Nile and Southern Kordofan states – was briefly detained by Government of Sudan police. The UNMIS team was accompanied by two members of the United Kingdom and United States consulates in Juba, the capital of Southern Sudan.

According to the Government of Sudan officials in the area, the flight did not have the requisite landing authorization, although UNMIS had obtained flight clearances from the Government of Southern Sudan in Juba. The entire team was released and returned to Malakal in Upper Nile state and no one was harmed in the incident.

The UN Office for the Coordination of Humanitarian Affairs (OCHA), meanwhile, reported that the situation in Abyei remains tense and volatile a month since fighting resulted in the displacement of nearly 113,000 people.

Clashes between SAF and SPLA were also reported on Wednesday near the Banton Bridge in Abyei, according to OCHA, which added that UNMIS had confirmed the movement of SAF troops from Abyei town southwards towards the bridge and that of SPLA forces northwards from Agok town and Twic county.

An inter-agency food security and livelihood assessment team last week visited Wunrok, Mayan Abun, Turalei and Agok, where internally displaced persons (IDPs) who fled Abyei when it was taken over by SAF on 21 May found that the prices of staple food, such as sorghum, have increased by 40 per cent in local markets.

The spike in food prices is a cause for concern considering that rainfall is expected to intensify in two weeks rendering roads to Agok impassable, a factor that will reduce grain supplies to the area, according to OCHA.

A second convoy of 13 trucks carrying humanitarian aid, including fuel and other non-food items, was due to depart from Juba today headed for Wunrok, Turalei and Kwajok in Warrap state, Malualkon and Aweil in Northern Bahr el-Ghazal state, and Wau in Western Bahr el-Ghazal. Warehouses have been erected in Wunrok and Turalei and another store is under construction in Agok, according to OCHA.

This year’s joint funding appeal for humanitarian work in Sudan, which is seeking $1.7 billion, has currently received $731 million.

In Southern Kordofan, insecurity and restrictions on movement of humanitarian personnel continue to severely limit access to IDPs around Kadugli and other areas, OCHA reported.

As part of an inter-agency response, members of the Humanitarian Country Team have called for the creation of humanitarian corridors, particularly between Kadugli and El Obeid, to allow the safe passage of people who wish to leave.

OCHA reiterated its call on all parties to the conflict in Southern Kordofan to refrain from targeting civilians and using indiscriminate military tactics. The Office urged them to respect and protect civilians and allow access to them by emergency aid workers as required under international humanitarian law.

Josette Sheeran, the Executive Director of the UN World Food Programme (WFP), expressed deep concern over the escalating conflict in Southern Kordofan, saying that further fighting may undermine the agency’s efforts to reach the 400,000 people it was feeding before the latest outbreak of violence.

In a related development, the Deputy High Commissioner for Human Rights, Kang Kyung-wha, will begin an eight-day mission to Sudan on Monday.

During the mission, Ms. Kang is due to visit Khartoum, Southern Sudan, Darfur and the Transitional Areas, and meet high-ranking officials, including the Vice-President of Southern Sudan, the country’s Foreign Minister and the Chief Justice.

In Darfur, she will visit several camps for IDPs and places of detention. She will also use the opportunity to raise key issues and lend her support to human rights defenders. 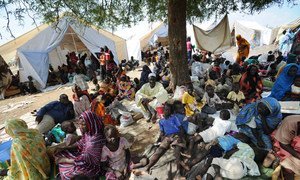 The United Nations World Food Programme (WFP) today said it is assisting thousands of people fleeing from fighting Sudan’s Southern Kordofan state, but the conflict continues to hinder the agency’s efforts to reach more people uprooted by the violence.