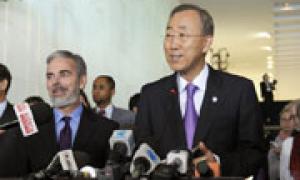 Secretary-General Ban Ki-moon has praised Brazil for its leadership and commitment to world peace and security, regional integration, development and the promotion of the values and goals of the United Nations, including human rights.

“Brazil is positioned in a very strategically good position to make a consensus between the developed and developing countries, and I appreciate such a strong commitment to promote South-South cooperation and this is exactly what we expect from emerging countries like Brazil,” Mr. Ban told reporters at a joint press briefing with Brazil’s Foreign Minister Antonio Patriota in Brasilia yesterday.

He expressed his appreciation of Brazil’s to UN peacekeeping and humanitarian efforts, especially in Haiti and Timor-Leste.

The Secretary-General said he was also counting on Brazil’s leadership at the UN Conference on Sustainable Development (Rio+20), which will be held in Rio de Janeiro in June next year.

“This will be the most important, top priority issue for the United Nations. We have been dealing with climate change, we have made good progress, even though we are not able to agree on [a] global acceptable comprehensive agreement,” said Mr. Ban.

“We are now facing food security, energy security, water scarcity issues and health issues. All of these health issues are interlinked. That means we need to look at these issues from a broader perspective in a more comprehensive way. We will exert all the efforts to make this Rio+20 a great success for humanity, to make this world and planet Earth environmentally sustainable and hospitable,” he added.

Answering a question on the ongoing bloody repression of demonstrators calling for democracy in Syria, the Secretary-General said he had repeatedly called upon President Bashar al-Assad to heed the people’s demands for civil liberties and human rights and to stop killing his own people.

“It is totally unacceptable that many civilians, peacefully demonstrating to have their genuine wishes for greater freedom and democracy [heard], have been killed and wounded.

“I again strongly urge President Assad and his… regime…. to stop killing people and to engage in inclusive dialogue and to take bold measures, decisive and bold measures, before it is too late. And I also hope that the United Nations will be able to speak in a coherent manner,” said Mr. Ban.

Responding to a question on Libya, where the pro-democracy opposition is bidding to oust the country’s long-time ruler Muammar al-Qadhafi, Mr. Ban said he and spoken to authorities there as well and demanded that they stop killing people.

“A ceasefire in a verifiable manner, [is needed] so that the United Nations and other international humanitarian community can provide humanitarian assistance to many needy people.

“The humanitarian situation in many places, in many cities like in Misrata, has very much deteriorated. And we are also now starting to prepare for post-crisis arrangements, a peacebuilding and peacemaking process, including providing humanitarian assistance and protecting human rights,” Mr. Ban told reporters.

Asked about Security Council reform, the Secretary-General said it was “long overdue.”

“If you consider the dramatic and significant changes which have taken place during the last 65 years, the Security Council needs to be, should be, changed. Adapting to changing situations, that means the Security Council should be reformed in a more representative, a more credible and democratic way,” he said.

He said UN Member States had begun “text-based” negotiations on Security Council reform and hoped they will accelerate discussions and come up with a mutually-agreed modality for the expected changes.

In a meeting with Brazilian President Dilma Rousseff earlier yesterday, Mr. Ban invited her to take a lead role at the international conference on nuclear safety and security that the Secretary-General has convened in September. Their discussions also touched on the Rio+20 Conference.

Mr. Ban noted Ms. Rousseff will this year be the first woman in the history of the UN to open the General Assembly’s annual high-level General Debate.

Secretary-General Ban Ki-moon is set to meet Brazil’s President Dilma Rousseff, Foreign Minister Antonio de Aguiar Patriota and members of the national Parliament during his final stop on a four-nation visit that has already taken him to Colombia, Argentina and Uruguay.