Top United Nations officials today stressed the need for governments, the private sector and civil society to work together and more effectively to address cancers, diabetes and other non-communicable diseases, which account for nearly two thirds of global deaths each year.

Top United Nations officials today stressed the need for governments, the private sector and civil society to work together and more effectively to address cancers, diabetes and other non-communicable diseases, which account for nearly two thirds of global deaths each year.

“No one actor is able to harness the resources necessary or address the complex range of factors that are driving the progression of these diseases,” Joseph Deiss, President of the General Assembly, said in his opening remarks to the informal civil society hearing held at UN Headquarters.

The hearing brings together academics, medical and public health experts, community leaders, health activists, philanthropists, business executives and others committed to countering so-called “NCDs.” It is a precursor to the first-ever high-level meeting of the Assembly on the prevention and control of these diseases, which will begin in New York on 19 September.

According to the UN World Health Organization (WHO), 36.1 million people died in 2008 from conditions such as heart disease, strokes, chronic lung diseases, cancers and diabetes. Nearly 80 per cent of these deaths occurred in low- and middle-income countries.

Mr. Deiss noted that the decision to convene the high-level meeting was an acknowledgement by the Assembly that the prevalence of these diseases around the globe is such that it warrants a concerted global response.

“An important challenge that the global community faces is how to build these partnerships and to respond effectively at a time of financial constraint and at a time when there is still much work to do on other global health issues,” he added.

“Let me be clear: NCD prevention and control is not competing with other development and health priorities, and it is important to understand that addressing NCDs is contributing to improving health conditions and development in general.”

Deputy Secretary-General Asha-Rose Migiro stressed how important civil society partners are to the global fight against NCDs. “You are on the frontlines of the fight against these diseases. We, in the international community, are finally catching up with you.”

She added that governments need such partners to carry out the plans they adopt, noting that NCDs are played out not in intergovernmental conference rooms, but in homes and communities.

“That is where you come in. People naturally turn to their civic leaders in times of crisis. They reach out to religious figures, local businesses, community health clinics and other civic institutions,” said Ms. Migiro.

“You have opportunities to help individuals prevent and treat NCDs. You can instil trust, promote better habits and encourage change. And through these measures, you can save many lives.”

She added: “A journey of a thousand miles may begin with a single step, but we can take thousands and thousands of steps forward at once if we walk together. This is a great march toward progress, and you can all help lead the way.”

♦ Receive daily updates directly in your inbox - Subscribe here to a topic.
♦ Download the UN News app for your iOS or Android devices.
non-communicable 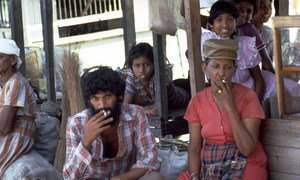 Health experts from around the world have convened in Moscow to tackle non-communicable diseases, which are the leading killer today and on the rise, according to a new report issued by the United Nations World Health Organization (WHO).